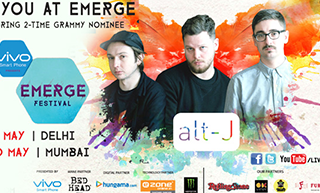 MUMBAI, 23rd April, 2015: LIVE Viacom 18 has always gone that extra mile to introduce and connect music enthusiasts with their interests by providing the right platform and are committed to provide an experience that is memorable as well as entertaining. The organizers deeply regret the cancellation of the festival in Delhi due to the unpredictable heavy showers and thus, ensuring that their audiences get another chance to experience the alt rock sensation, LIVE Viacom 18 brings EMERGE with Alt – J back to Gurgaon on 21st of May 2015 and then to Mumbai on the 22nd of May 2015.

Alternate rock sensation, Alt- J took music enthusiasts by a storm on their first visit to India in February 2015. Fans have been spell bound by their charm ever since. Their live- set performance at Emerge festival in Bangalore got sold out within minutes of the tickets going on air with more than 6000 music lovers attending the event. On popular demand, Viacom 18 is delighted to announce a welcome return of Alt- J to India this summer as part of the Emerge Festival.

Live Viacom18 in association with Vh1 India, has put together EMERGE Festival which promises to be a phenomenal day of fun and frolic in the music loving cities.

At the very core of EMERGE is a musical discovery- a platform, a forum where young fans can expect an experience like no other, where they will be able to truly open their minds and have a chance to discover something unique, something that will blow their mind.

Commenting on their return ALT-J band member Gus Unger-Hamilton “We can’t wait to come back to India. Our first trip there was incredible and we’re looking forward to seeing our fans out there again at the Emerge Festival.”

Following exceptionally successful events over the last few years in the form of MTV Bollyland, Nickelodeon Kids Choice Awards and VH1 Supersonic, LIVE Viacom18 is all set to further expand its activities in the entertainment sphere, reaching new audiences and the youth by launching a day-long festival EMERGE: a one-of-a-kind art and music experience.

Commenting on the return of ALT J for Emerge, Mr. Jaideep Singh, Sr. Vice President and Business Head – INS, Viacom18 Pvt. Ltd. said, “At LIVE Viacom18, we always aim at going beyond traditional norms and experiments in the music & entertainment space. We are committed to providing an experience to remember and we are happy to bring back the band to our audiences to live up to the promises we made to them.”

Mr. Alex – CEO , vivo Mobile India, on the association: “Emerge is an integral part of our strategic marketing alliance with Viacom18 that intends to bring the brand ‘vivo Smart Phone’ and its promise alive in the consumers mind. vivo Smart Phone believes in making a consumer’s life Hi-Fi & Smart with the help of technology. Music and creativity are the cornerstones of the brand’s ethos and aiding consumers to create something magical using the phone is the brand promise. EMERGE as a property has already established its name amongst the youth of this country through various high voltage performances by best of the emerging artists from across the globe. It stands out as a unique platform that allows the youth to express themselves through music and art, both of which are the best avenues for creative liberation. We intend to connect with the youth of this country through this platform and a festival that showcases such creativity will definitely serve as a perfect platform for the same”

Opening the act for ALT-J will be Prateek Kuhad, Prateek is a singer-songwriter from New York/New Delhi, active since 2010. His music can be described as pop rock. He plays several acoustic shows across New York City. Having performed at venues across New York, Prague, New Orleans and India and with the release of his EP, Raat Raazi, in 2013, Prateek Kuhad instantly established himself as one of the most promising artists in the Indian independent music scene.

Along with Prateek Kuhad, another Indian Band band which will be performing in Delhi is Advaita – a Fusion band from Delhi, formed in September 2004. It is the expression of eight distinct musical sensibilities that dissolve into each other to bring forth a truly unique and ingenious sound. Their music is deeply inspired by the quest to discover rhythms and textures that resonate around us and within us. Advaita was featured on the Indian leg of the MTV shows Coke Studio and MTV Unplugged.

Emerge invites all the music enthusiasts to groove and sweat it out this summer with Alt- J, rock sensation music on 21st and 22nd May at Gurgaon and Mumbai respectively.

For the best tickets log on at the earliest to http://www.meraevents.com/event/emerge-festival