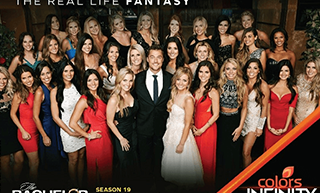 ~ Catch the popular international reality shows – The Bachelor, The Bachelorette & Bachelor in Paradise starting this July, only on COLORS INFINITY ~

National, Thursday, July 6: Prepare to be taken on a passionate roller-coaster ride of romance and reality television as COLORS INFINITY brings to you ‘BACHELOR NATION’ – a new block of shows including The Bachelor – Season 19, The Bachelorette – Season 11and Bachelor in Paradise – Season 2. In addition to Bachelor Nation, COLORS INFINITY has decided to add a little extra zing to its programming line-up this month with an assortment of crime, drama and superhero shows, including Chicago PD and Powers. This JulyCOLORS INFINITY is all set to redefine primetime entertainment with phenomenal reality television, gripping crime drama and novel fantasy.

Following the growing popularity of The Bachelor and the ever-growing buzz around it, the show has attracted attention across the globe, including India. Taking forward the custom of offering variety in content, COLORS INFINITY has now added The Bachelor to its line-up of already exciting and emotive shows. Hosted by Chris Harrison, the Indian audience will now get to witness extreme reality-drama as one eligible Bachelor begins his search for the perfect partner.

In addition to this, COLORS INFINITY will be celebrating the 99th birth anniversary of ‘Madiba’ – the dearly missed Nelson Mandela. Paying homage to his legacy, the channel will air the biopic Mandela – Long Walk to Freedom, starring Golden Globe winner Idris Alba on Tuesday, July 18.

Elaborating on the new show line-up, Hashim Dsouza, Head of Programming, English Entertainment, Viacom18 shared, “The demand for quality content in the English Entertainment space has been growing rapidly. Our strategy to meet this appetite of the viewers is to keep a balanced mix of genres, that attract the attention of the viewers and keep them engrossed in the content. With ‘Bachelor Nation’ we present an international reality television drama, that Indian audience will unquestionably enjoy. Along with the additions to our line-up of shows – Chicago PD and Powers, that universally appeal to viewers across the board, we will be telecasting the critically acclaimed biopic Mandela: Long Walk To Freedom as a tribute to the legendary Nelson Mandela.”

Chicago PD follows the adventures of the two units of the Chicago Police Department of uniformed cops and the Intelligence Unit, that combats the city’s street crimes and major offences.

So, forget the television remote, make some popcorn and never leave your couch this July, with shows like The Bachelor, Chicago PD, Powers, Couples – Come Dine with Me, America’s Next Top Model and a lot more, COLORS INFINITY turns into your one-stop-shop for entertainment with an extravagant show line up.

Don’t miss the premiere episode of The Bachelor on July 12, along with Powers and Chicago PD airing on Weekdays only on COLORS INFINITY

About VIACOM18:
Viacom 18 Media Pvt. Ltd. is one of India’s fastest growing entertainment networks and a house of iconic brands that offers multi-platform, multi-generational and multicultural brand experiences. A joint venture of Viacom Inc. and the Network18 Group, Viacom18 defines entertainment in India by touching people on air, online, on ground, in shop and through its cinema.