Media
Fueled by love and vengeance, Ashoka returns from anonymity after 10 years to become ‘Ashoka the Great’ 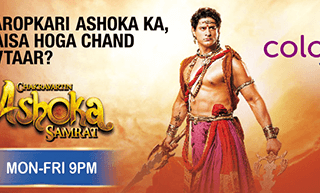 ~From Ashoka to Chand, a new journey begins on Chakravartin Ashoka Samrat starting 2nd May 2016, every Monday to Friday at 9:00 PM on COLORS~

Mumbai, 29th April, 2016: Revenge is an act of passion; vengeance of justice. Taking a stand against the wrongdoings meted out against him, Ashoka has returned from obscurity with retribution on his mind. Following a 10 year leap, COLORS’ historical magnum opus Chakravartin Ashoka Samrat will now narrate the story of Ashoka’s new avatar called Chand (merciless) – a vindictive force whose aggression will win him the throne of Pataliputra and eventually make him the Greatest Emperor of Akhand Bharat (the undivided India). Alongside will blossom his tender love story with the feisty and beautiful, Kaurwaki. Essayed by Mohit Raina in the lead role (as Chand Ashoka) and Somya Seth (as Kaurwaki), this new chapter in Ashoka’s life will unfold starting 2nd May 2016, every Monday to Friday at 9:00 PM on COLORS.

Shedding light on this new phase in the story, Manisha Sharma, Programming Head – COLORS, said, “Since its launch, Chakravartin Ashoka Samrat has enjoyed tremendous viewership across age groups. As we take a generation leap, the show will now focus on the emotional turmoil inside Ashoka as he becomes Chand (the feared), his return to Pataliputra following his exile, and his unflinching love for Kaurwaki making him a multi-faceted character that will appeal to the viewers’ sensibilities.”

What started as a journey to restore his mother, Dharma’s honour soon transformed into Ashoka’s ascent as the rightful heir to the throne of Pataliputra. However, being wrongfully blamed for his brother Sushim’s transgressions finds him exiled from Pataliputra at the hands of his father Bindusar. 10 years on, having buried his emotions deep in the crevices of his soul, Ashoka has now become a true warrior whom the people fearfully address as Chand. But, even though the outside world sees a cold and heartless man, Ashoka’s feelings for Kaurwaki keep him from turning completely evil; he pines for her company and hopes to see her someday. But an unexpected twist of fate will separate them as Ashoka finds himself married to Devi instead. Under the watchful eye of his new teacher Radhagupta, Ashoka will continue his journey as a feared warrior and gentle lover, whose power and magnanimity shaped the future of our country.

Commenting on taking Ashoka’s legacy forward, Mohit Raina said, “The magnificence of a warrior king like Ashoka is unparalleled. Chakravartin Ashoka Samrat is a historical masterpiece and it brings me tremendous pleasure to be a part of the show. This role I feel will be the next milestone in my career. ”

Commenting on Ashoka’s new chapter, Abhimanyu Singh, CEO – Contiloe Pictures said, “It is very encouraging to see the love and affection shown by the audience for our historic show Chakravartin Ashoka Samrat. It was our endeavor to show the life and journey of the greatest emperor who has ruled and created this great nation. While a chapter in his life has concluded, a new one is about to begin. Now, his journey will show how he created the empire of India against all odds”.

Chakravartin Ashoka Samrat brings together best minds from the world of entertainment, and an ensemble cast comprising of Somya Seth as Kaurwaki, Ankit Arora as Sushim, Kajol Shrivastav as Devi, Dakssh Ajit Singh as Radhagupta. The show also features actors Sameer Dharmadhikari and Pallavi Subhash who have immortalized the characters of Emperor Bindusar and Dharma respectively.

COLORS will be live-streaming the grand unveil of Ashoka from Chakravartin Ashoka Samrat’s opulent sets at ND Studios in Karjat on Facebook (www.facebook.com/COLORSTV).

Chakravartin Ashoka Samrat charts the new phase of Chand Ashoka’s life starting 2nd May 2016, Every Monday to Friday at 9:00 PM on COLORS!