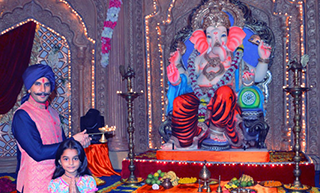 Lord Ganesha is also known as ‘Vignaharta’ meaning that he helps in solving the problems one might face. And that’s exactly what transpires when Udann’s Chakor is running helter-skelter looking for her young sister, Imli. Her knight in shining armour, though, turns out to be none other than actor Ranveer Singh who shows her true direction and strengthens Chakor’s belief in Lord Ganesha’s powers. And joining to solve Chakor’s troubles will be COLORS’ leading ladies Thapki and Swara as a part of Ranveer’stoli.

In a special episode to air on COLORS at 8:30pm on 15th September, 2015, viewers will see Chakor try to find her sister Imli to save her from the organ trade mafia and take her back to Azadgunj to safety. As she tries her best to find Imli at the Ganpatipandal, she bumps into Ranveer Singh who reinforces faith for the power of good in her and encourages Chakor to dance to a grand aartiin the name of Lord Ganesha. This grand aarti will also mark the launch of ‘Gajanana’ the first song from Ranveer’s upcoming film Bajirao Mastani produced by Eros International and Bhansali Productions, directed by Sanjay Leela Bhansali to be released worldwide on December 18.

Commenting on the song’s launch, Ranveer Singh said, “It is said that every new chapter should be kicked off with a Ganesh Aarti, and that’s the reason it is the first song we’re launching to kickstart promotions for Bajirao Mastani. Udann’s Chakor is a very talented child and filming this sequence with her was a breeze!”

Adding to this, Chakor aka Spandan Chaturvedi said, “Shooting with Ranveer uncle for Udann today was a very special experience. I would like to thank him for joining us on the sets and wish him all the best for his film Bajirao Mastani.”