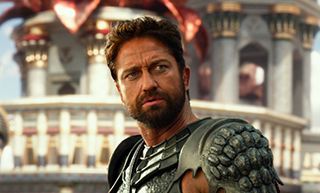 For those of you who are fans of the charming Gerard Butler and his epic film 300, upcoming action film Gods Of Egypt promises to up the bar a few notches with its sheer scale and breathtaking visual effects. Gerard will once again be seen wielding the sword and donning the cape as he brings to life the “God of Darkness’’ Set.

The story witnesses Set (Gerard) and the powerful Lord of Air Horus (Nikolaj Coster-Waldau) at war. The film further transports the audiences into the exotic world of Egyptian mythology – Gargantuan monsters, giant serpents and a spectacular battle of the gods leaves the survival of mankind hanging in the balance.

Commenting on the same, Ajit Andhare – COO, Viacom18 Motion Pictures said, “We are delighted to collaborate with Lionsgate on Gods of Egypt. With this association, we have expanded our English film slate to cater to the growing Hollywood market in India. This is the movie to watch for all the big canvas film lovers.”

Visionary director Alex Proyas has combined the timeless art of storytelling and the latest in digital cinema technology to present viewers with a pulse pounding action adventure film in 2D, 3D and IMAX 3D.

Marketed and distributed by Viacom18 Motion Pictures in India, Gods of Egypt releases on February 26, 2016 in English, Hindi, Tamil and Telugu.