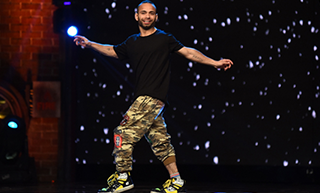 India’s Got Talent continues to wow viewers every weekend with mind-blowing performances. Last Sunday the talent based reality show was in for a surprise when they learnt that the Master Blaster Sachin Tendulkar was an avid follower as well!

24 year old Aakash Bhagat hails from Ludhiana and has an interesting history behind his dance form “The Mad Contemp”.  Performing this unusual dance style in front of an awestruck audience and stupefied judges, Aakash began to cry.

Overwhelmed after the stupendous performance, he said he cried because he had finally proved a point to his family. He went on to explain that his family is full of doctors and engineers and everyone found him weird because of the different approach he has towards life.

Aakash added that he doesn’t want to conform to what society considers as normal. People called him abnormal or even mad at times. His family does not approve of his way of life and the love of his life left him labelling him as ‘mad’.  Aakash wants to follow his dreams and put all his energies into dancing. This is one of the reasons he has pursued his education beyond standard 12.

On hearing his story, talent guru Kirron Kher got emotional, walked up to him. Hugging him tight she said she understood his pain and identified with. Such was the emotional connect between Kirron and Aakash that it overwhelmed Malaika Arora Khan and Karan as well.

Speaking about his feelings Aakash states, “It is unbelievable that Sachin Tendulkar who not only the nation and the whole world admires, appreciated my performance on India’s Got Talent.  I never thought I would get selected on the show let alone the fact that the Master Blaster is tweeting about me!  It is an amazing feeling. There was a time when I did not even get selected on India’s Got Talent way back in season 4, and today I have ace personalities like Sachin Tendulkar, apart from talent gurus Kirron Kher, Karan Johar and Malaika Arora Khan appreciating me. It is very exciting and motivating for a person who comes from a small town like me to receive such accolades. I am glad that I was able to prove a point to my family which has now made them support my performance and way of life. I am confident I will only perform better than this in the competition going forward.”