Media
Anushka and Ranbir sizzle on the India’s Got Talent stage! 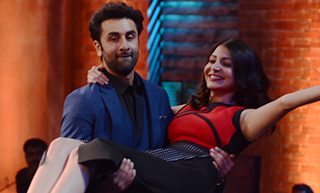 ~ Fun, frolic and a lot of humour – the Bombay Velvet special on India’s Got Talent is slated to entertain viewers! ~

The dais of India’s Got Talent, known to make way for dreams to come true, was graced recently with superstars Ranbir Kapoor and Anushka Sharma. Antics of both actors added an element of humour and fun into the episode. The duo was introduced in the true Bombay Velvet style by talent guru Karan Johar. Karan Johar, Director turned Actor in Bombay Velvet, donned his Bombay Velvet avatar, when he introduced Anushka Sharma as the greatest singer of the 50’s and a vivacious dancer, Rosy.

When Bharti made an appearance on the show as Anushka’s Bombay Velvet character Rosy to righteously fight for Ranbir Kapoor, the conversation ended in a dance face-off between the two ‘Rosy’ potentials. And when Ranbir Kapoor decided that he would much rather stick to the original Rosy, Bharti wrestled RK to the ground.

Another fun moment for Ranbir was when a ventriloquist made an appearance on India’s Got Talent. The ventriloquist threw his voice at Malaika, making it look like Malaika was talking underneath the mask she wore. Intrigued by this act, Ranbir got on to the stage and had a blast being at the other end of the talented ventriloquism. Ranbir was also confronted by a young fan boy Yash Khandelwal and was more than happy to shake a leg with the child to his Barfi song ‘Iss Dil Ka Kya Karoon’. Impressed with the little child, Karan Johar also claimed that he would like to cast the little boy in the third sequel of his hit movie Student Of The Year because Yash would be grown up by then.

All in all, the Bombay Velvet integration on India’s Got Talent made for a gala episode, which not only will make for quality viewing but will also entertain the viewers!