Media
In an industry first, CIPAM and Viacom18 join hands to launch campaign against Piracy 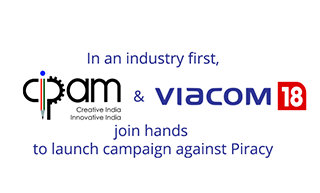 National, August 22 nd , 2017: Being at the forefront of Intellectual Property Rights (IPR) protection, Viacom18 today announced its partnership with the Cell for IPR Promotion and Management (CIPAM), a professional body under the aegis of Department of Industrial Policy and Promotion (DIPP) to launch a sustained behavior change and capacity building campaign around protection of proprietary content and fight against piracy.

Intellectual Property Rights (IPRs) are increasingly becoming crucial drivers of social and economic growth in the 21st century. In this context, Department of Industrial Policy and
Promotion (DIPP) is organizing a three day “National Workshop on Enforcement of Intellectual Property Rights” from 22 nd to 24 th August, 2017. The workshop was inaugurated today by Hon’ble Union Minister of Home Affairs, Shri Rajnath Singh. This workshop is designed to help police officials and prosecutors across the country in understanding and appreciating the importance of their role in effective enforcement of IPRs. It will also provide an opportunity to the officials to share their experiences, exchange best practices and coordinate effectively with each other.

This is not the first time that Viacom18 has been championing the cause of IPR protection.Earlier this year, along with the Bombay High Court, the media conglomerate conducted a crack-down on counterfeit merchandise of their licensed character Dora the Explorer. This initiative was primarily targeted to protect children from hazards of using inferior quality products under their misrepresentation of them as Viacom18 Consumer Products merchandise.The company, which also owns Viacom18 Motion Pictures, had previously led a campaign against film piracy.

Speaking about this initiative Sujeet Jain, Group General Counsel and Company Secretary, Viacom18 said: “When it comes to consumption and circulation of pirated content, there is very limited knowledge about its economic and social impact. In furtherance to the National IPR Policy adopted by the Government of India and through this partnership with CIPAM, we hope to raise awareness amongst youth and children about the perils of piracy and need for the protection of IPR.”

Shri Rajiv Aggarwal, Joint Secretary, Department of Industrial Policy and Promotion said:“A possible solution to the problem of piracy lies in creating awareness about IPR among the masses. It is pertinent to note that one of the main objectives enshrined in the National IPR Policy is creating awareness about IPRs to build a healthy IP ecosystem in the country. We are glad that Industry is helping us in our journey of making Creative India; Innovative India. I thank Viacom 18 for taking lead to rally the cause of IPR protection.”

As a part of the association with CIPAM, Viacom18 has created a behavior change awareness videos for kinds involving its popular animated characters of its flagship kids’ channel Nickelodeon and Sonic, Motu-Patlu and Shiva, respectively, spreading the message of how piracy is equivalent to stealing. The campaign will see CIPAM and Viacom18 airing these videos across schools, colleges and various educational institutions, in addition to the network’s kids channels, to educate young minds on the ills of piracy.

Viacom18 Media Pvt. Ltd. is one of India’s fastest growing entertainment networks and a house of iconic brands that offers multi-platform, multi-generational and multicultural brand experiences. A joint venture of Viacom Inc. and the Network18 Group, Viacom18 defines entertainment in India by touching the lives of people through its properties on air, online, on ground, in-shop and through cinema.