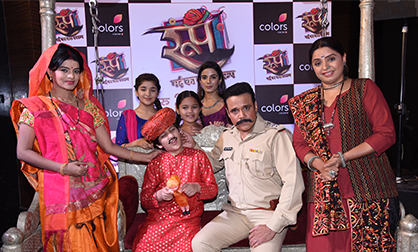 ~ Questioning sensitivities, Roop premiers on 28th May 2018, airing every Monday – Friday at 9 pm only on COLORS ~

Mumbai, 16th May, 2018 – Tough, strong, muscular and in control epitomizes the “ideal” man. What’s more – masculinity defines the true Mard as one who never shows a weakness, doesn’t shed a tear and considers being sensitive a sign of being feminine. With an aim to shatter these stereotypes, COLORS introduces viewers to Roop – Mard Ka Naya Swaroop. The young 8-year-old boy – Roop (Played by Afaan Khan) questions sensitivities of a patriarchal society that decides how men and women ought to behave. Produced by Rashmi Sharma Telefilms Ltd, Roop hopes to change these age old typecasts starting 28th May 2018, Monday to Friday at 9 pm COLORS!

Commenting on the show, Manisha Sharma, Programming Head – COLORS said, “The most beautiful part about Roop’s character is that he’s been born into a family with three sisters. By default, he loves helping his mom and playing with his sisters, which in the real world isn’t considered appropriate for boys. As an 8-year-old boy, Roop is very confused as to why the universe is pushing girls to become inspectors, pushing girls to drive but look down upon boys who want to study home -science, enjoy stitching or cooking. He’s very perplexed because his father is a daroga who thinks men should be very macho and should play with guns to show their manhood. Like our other shows on social issues, this one is going to touch upon the fact that why in the new world must a man establish his manhood through things which are aggressive and violent.”

Producer Rashmi Sharma from Rashmi Sharma Telefilms further elaborated saying, “We may believe that we have evolved towards modern thinking but the truth is that deep down, we still harbor certain preconceptions that go unquestioned. Why does our daughter get a kitchen set while the son plays with a car? This thought needs to be relooked and with Roop – Mard ka Naya Swaroop’, we are attempting to bring a positive change in the mindset that prevails in today’s society.”

Speaking about his character, Yash Tonk said, “As a concept, ‘ROOP – Mard ka Naya Swaroop’ is rather unique and my character echoes what many of us feel about the characteristics of being a man. A daroga who takes pride in his moustache, Shamsher Singh answers to no one and advocates strength as a sign of manliness. But, I urge all men of this country to understand that women have the same sentiments and aspirations like men and we should accept them as an equally important part of the society. I think COLORS and Rashmi Sharma have managed to create something that will leave a deep thought in the mind of the viewers and I can’t wait for the show to start.

On playing the role of Kamla, Roop’s mother Mitaali Nag said, “Roop breaks the shackles of traditionalism when it comes to set roles of men and women in the society. My character Kamla is like any other mother and wife; who is overprotective towards her kids and willing to go to any extent to protect them from their father’s wrath. I would like to thank the channel and the creators of the show, for making me a part of this thought provoking concept.”

Adding further Vaishali Thakkar aka Kaushalya Bhen said, “I have had the opportunity to play diverse roles on television, but the story of ‘Roop – Mard Ka Naya Swaroop’ is not only entertaining but educating as well. My character is that of an orthodox woman who believes that only boys can do wonders. But with this show, we want to change this idea and teach our boys a new definition of being a real man. Our boys should be strong yet emotional, take care of their people and overall, be respectful of the other sex.”

Be a part of Roop’s fun filled, yet through provoking journey starting 28th May, 2018, every Monday to Friday at 9 pm only on COLORS!