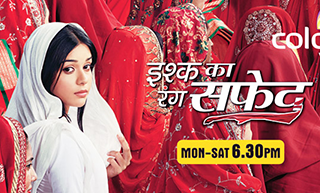 Mumbai, August 07, 2015: A widow doesn’t have the right to fall in love. It’s a sin for her to even harbor the thought of love. She can only show her love towards Almighty. Let alone remarriage, even making an eye contact with another male is considered immoral for her. She is required to lead an exceptionally simple life devoid of any adornments and amusements. Any man who wishes to marry a widow, he and his seven generations will lead a cursed existence. These are probably just few of the unwritten decrees for the thousands of widows residing in Banaras. Amongst all the hustle bustle of this vibrant city, resides another world altogether. A world of women in white who have literally given up on everything that is colorful. Leading one such despicable entity in this pious land is a 20-year-old widow, Dhani whose sins are much more complex other than just being young and beautiful. Destiny makes Viplav cross her path; and the handsome bloke falls head over heels in love with her.

COLORS’ new offering Ishq Ka Rang Safed introduces you to Dhani and Viplav and how their lives intersect along the Ganges. Dhani is a young widow who has given up all hopes of a good life and Viplav, a high caste boy who is hopelessly in love with her and wants to break away from all the moral constructs to make her his own. Will their love bloom and find acceptance in this orthodox society?

Making a comeback on the small-screen, Mishal Raheja has been cast opposite newcomer Eisha Singh. While carefree Viplav prioritizes happiness over rules, Dhani is uncomplainingly confined within the conventional protocols of widowhood. Produced by Film Farm Productions, Ishq Ka Rang Safed will premiere on COLORS on August 10, 2015 at 6:30 PM, and air every Monday through Saturday.

Commenting on Ishq Ka Rang Safed, Manisha Sharma, Programming Head – COLORS said, “At COLORS, we have always made path-breaking shows, which balance both – the entertainment quotient as well as meaningful content. Ishq Ka Rang Safed brings out the conflict between pratha (tradition) and pyaar (love). Viplav and Dhani’s lives make a powerful yet impossible love story. We have shot an extensive outdoor in Banaras in order to bring alive the colors and cultures of the holy city and portray the stark realities and conservative thinking still prevalent in the 21st century. We are also exploring the 6:30pm time band with an original content that has an universal appeal.”

Viplav, the youngest grandson of the famously orthodox and religious pandit, Dashrath Tripathi, is a rebel with contemporary beliefs. Voicing his opinion unflinchingly, Viplav is known to be impulsive. He and Dhani are opposites. Not be mistaken for meek, Dhani rarely is outspoken. Easy-going and accommodating, Dhani barely complains or protests. She has submitted to her fate till Viplav comes along her way and ruffles her white life with colors.

Said Producer Rupali Guha,“Ishq Ka Rang Safed is our second offering on COLORS. After Uttaran, we wanted to come back with an equally strong & poignant subject. When I read a short story about widows I felt some things in India cannot change; one of them being rituals and beliefs associated with widowhood. The title was inspired by a Rekha Bharadwaj song based on Kabir’s dohas. In fact it was a pleasure to re-record the song with Rekhaji. We hope the viewers appreciate our efforts as we bring forth this beautiful love story of Viplav Tripathi played by the extremely talented and sensitive actor, Mishal Raheja and Dhani, played by young newcomer, Eisha Singh. The cast is ably supported by stalwarts such as Pratima Kazmi, Arun Bakshi, and Vidya Sinha.”

Speaking about his role as Viplav, Mishal Raheja said, “I wanted to make a comeback to the small screen through a strong character with a difference. The volatile role of Viplav fits in perfectly with the definition of what I wanted. I immediately knew I had to sign the show!”

Commenting about her role as Dhani, Eisha Singh commented, “With Ishq Ka Rang Safed, I will kick start my acting career on a powerful platform like COLORS. At the threshold of my journey as an actor, essaying the role of a young widow, Dhani will add great value to my experience. While playing a bubbly girl-next-door appeals to every young actor, I feel lucky to have landed a challenging role such as Dhani.”

The marketing and digital initiatives for the show have been designed to primarily target the markets where such social evils are more prominent. High decibel activities have been planned across various channels, DTH, Cable, Radio and Print platforms in markets like Delhi, Punjab, UP, MP, Maharashtra and Gujarat. The week leading to the launch will have a digital campaign called #BreakTheWalls. Through a series of posts and tweets the campaign will talk about breaking religious/societal walls in order to promote and prompt initial conversations about the hash tag. Once the show is on-air, the users will be asked to share their stories of impossible love and how they managed to succeed despite all odds. Through a series called ‘In Their Shoes’, every week a new story will be put upon Facebook which will depict the extremely tough yet inspirational lives of widows in India. The stories will be sourced from the NGOs which work for the benefit of widows.

Will Dhani give herself a second chance at happiness? What happens when the grandson of the upholder of tradition and morality crosses the proverbial line? Does Viplav’s love break through the boundaries and walls built by society, religion and ancient tradition?

Watch Viplav and Dhani’s story unfold starting August 10, 2015, Monday to Saturday at 6:30 pm only on COLORS