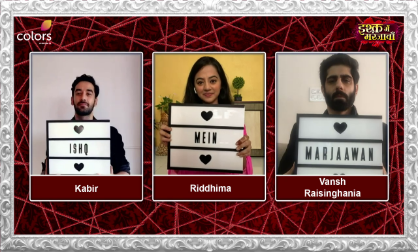 Ishq Mein Marjaawan will premiere on 13th July, 2020 and will air every Mon-Fri at 7pm only on COLORS

Mumbai, 8th July ,2020: All is fair in love and war says the adage. But to what extent one can go to prove their true love? What price can they pay for their love? And what happens when love becomes the biggest gamble of your life? Riddhima’s (played by Helly Shah) path to love is nothing less than a bed of thorns as she must first quench Kabir’s (played by Vishal Vashishtha) thirst for revenge before she unites with him. Mired in deceit and lies, COLORS’ romantic thriller Ishq Mein Marjaawan will compel you to change your perception of love. Once again, it will take viewers on the journey of love and revenge through the lives of Riddhima (played by Helly Shah), Kabir (played by Vishal Vashishtha) and Vansh (played by Rahul Sudhir). Produced by Inspire Films, the show premieres on 13th July,2020 and will air every Monday to Friday at 7:00 pm only on COLORS.

Nina Elavia Jaipuria, Head, Hindi Mass Entertainment and Kids TV Network, Viacom18, said, “At COLORS, we continue to live up to the promise of viewers first and the launch of Ishq Mein Marjaawan is an endeavor in the same direction. Having gone through multiple roadblocks owing to the pandemic, we are delighted to be back with a fresh new story. Romance and thrill are an unbeatable combination as they build a lot of intrigue and keep the audience at the edge of their seats. Ishq Mein Marjaawan is filled with drama, interesting plot twists, great performances and adds variety to our existing programming lineup.”

As the quest for love, power, money, and revenge put Riddhima and Kabir on a tough road, shocking discoveries at every step will turn their lives upside down. An orphan but an extremely compassionate girl who craves for true love, Riddhima falls in love with an enigmatic top cop Kabir who has been on the trail to track down an extremely dangerous white-collared criminal Vansh Raisinghania. Consumed by jealousy and retribution, Kabir does not think twice before putting Riddhima’s life at risk for his motives. He asks her to prove her loyalty towards him by taking a life-threatening decision that finds her in the middle of danger, lies, and conspiracies. Will she place herself squarely in the path of danger and abide by Kabir’s wishes? How will Riddhima find a way out of this maze to reconcile with her true love?

Manisha Sharma, Chief Content Officer, Hindi Mass Entertainment, Viacom18, said, “Ishq Mein Marjaawan has been a successful property and we wanted to emulate the success of the show through a new storyline and equally impactful characters. The show promises dynamic characters, thrill, and many hair-raising moments that will make you rethink the definition of love. We are convinced that viewers will once again fall in love with the characters and enjoy every moment of the suspense-filled journey.”

Mamta Y Patnaik, Producer, Inspire Films said, “We are delighted to be back with Colors to present to our viewers a fresh new romantic thriller. The beauty of the show as it is filled with multiple elements like revenge, mystery, heartbreak, deceit, and much more. It will test how far can our central characters Riddhima, Kabir, and Vansh can go for love and in doing so, how their lives will get entangled. The story is high on action and therefore we have roped in a great team to direct high octane stunts that will enhance the entertainment quotient of the show.”

Helly Shah who plays Riddhima said, “A thriller show was always on my bucket list and with Ek Baar Phir… Ishq Mein Marjawan, I am going to strike it off. My character is of a simple orphan girl who is trying to find her footing in Mumbai. Having craved for love and sense of belonging all her life, Riddhima’s sole dream is to find love and marry the person. Completed besotted by Kabir, Riddhima not only starts falling in love with him but also in his trap that changes her life forever. I hope the audiences like what we have to offer and appreciate our efforts.”

Vishal Vashishtha who plays Kabir said, “Ek Baar Phir…Ishq Mein Marjawan is a quintessential love story but with a solid twist. I play the role of a top cop who is on the lookout of Vansh and becomes the bane of Riddhima’s existence. Riddhima is blinded by Kabir’s love and she takes his every spoken word as a command.
The vulnerability of each character in the show makes it a lot more exciting.I’m looking forward to the action packed high octane drama this show will deliver.The overall plotline and the chemistry between the characters will definitely resonate strongly with the audience and I am looking forward to it.”

Rrahul Sudhir who plays Vansh Raisinghania said, “Vansh is unlike any character I have ever played before. He is a powerful and smart businessman who lives a life of secrecy and mystery. While playing the role I got to do some amazing stunts like ride a flyboard in Goa and be a part of a high-octane car chase sequence. While there is a lot of action involved, my character also has an emotional side to him. This is a fun role and I am happy to be a part of such an interesting project.”

While the race is on to get back audiences, the launch of Ishq Mein Marjawan is the perfect opportunity to lure them back. Keeping the same in mind, the marketing campaign has been designed to maximize reach through a television plan across network & non-network channels, with genres that have seen an upswing in viewership during the lockdown. Focusing on the theme of #PyaarKiHadd, COLORS will also present a series of fun, interactive activities to engage with the viewers on digital platforms. From creating a puzzle that questions whether there is actually a way out of the love conundrum, to exploring the other side of love with the help of love experts, the channel will delve deep into the subject. An interactive 360 darkroom experience will also be created on Instagram, where viewers can tap on the stories to explore the room and find various hidden symbols that tells them more about the characters. Additionally, a #PyaarKiKeemat love survey will ask India, what they believe is the thin line between what’s right and what’s not in a romantic relationship.

While the show is headlined by Helly Shah, Vishal Vashishtha, Rrahul Sudhir in lead roles, Madhurima Tulli, Garima Rathore will be also be seen on pivotal roles.

Catch the journey of three lives caught in the web of love, Ishq Mein Marjaawan every Mon-Fri at 7 pm only on COLORS

About Viacom18:
Viacom18 Media Pvt. Ltd. is one of India’s fastest growing entertainment networks and a house of iconic brands that offers multi-platform, multi-generational and multicultural brand experiences. A joint venture of Network18, which owns 51%, and ViacomCBS, with a 49% stake, Viacom18 defines entertainment in India by touching the lives of people through its properties on air, online, on ground, in shop and through cinema.

About COLORS:
‘COLORS’ is Viacom18’s flagship brand in the entertainment space in India. A combination of ‘emotions’ and ‘variety’, COLORS, launched on 21st July 2008, offers an entire spectrum of emotions to its viewers. From Fiction Shows to Format shows to Reality shows to Blockbuster Movies – the basket contains all ‘Jazbaat Ke Rang’. ‘COLORS’ is dedicated to promoting ‘Cohesive viewing’, through shows like Choti Sarrdaarni, Shakti…Astitva Ke Ehsaas Kii , Barrister Babu, Pavitra Bhagya, Shubharambh, Bigg Boss, Rising Star, Dance Deewane and Khatron Ke Khiladi amongst others.