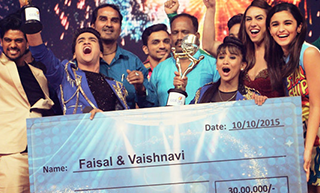 Mumbai, 10th October, 2015: The most glamorous celebrity dance reality show Jhalak Dikhhla Jaa Reloaded signed off its final episode on a majestic note. Beating the two best celebrity dancers Shamita Shetty and Sanaya Irani, Faisal Khan was pronounced the winner of this season’s winning title. Faisal Khan along with his dancing partner Vaishnavi Patil and choreographer Vivek Chachere showcased top notch performances consistently throughout this season. He danced his way to the finale with exemplary choreography and breathtaking moves. As Faisal Khan walked away with the coveted mirror ball trophy of Jhalak Dikhhla Jaa, he was followed by Sanaya Irani who came in as a close second while Shamita Shetty placed third.

The Super Finale was truly Shandaar in every sense with some grand performances both from the finalists and the judges. Rising star Alia Bhatt after shaking a leg  on  the song ‘Shaam Shandaar’ joined the judges Shahid Kapoor, Malaika Arora Khan and Dance Gurus Lauren Gottlieb and Ganesh Hegde to celebrate last leg of the outstanding journey of the contestants on the show this season.  Bollywood’s bombshell Shilpa Shetty also made a guest appearance to support her baby sister Shamita Shetty along with their parents.

During his journey in Jhalak, Faisal mesmerized everyone with his versatility and perfection. Whether it involved a semi-classical act, hip-hop locks, lindy hop energy or robotic moves, Faisal did all of it with élan. He along with his choreographer Vivek Chachere consistently raked in appreciation from the judges and dance gurus who also called him an inspiration to everyone. Clearly, it comes as no surprise that after all the positives showcased by Faisal, he has walked away with his head held high as the winner of Jhalak Dikhhla Jaa winning prize money of Rs. 30 lakhs and a Mahindra XUV Double O Car.

While speaking on winning Jhalak Dikhhla Jaa Reloaded, Faisal Khan said,” I am astounded to win Jhalak Dikhhla Jaa Reloaded. All credit goes to my choreographer Vivek and my partner Vaishnavi for their constant support. The competition has been tough and receiving such great comments from the judges and dance gurus week after week kept me going. I could not be more honored to have Sanaya Irani and Shamita Shetty competing beside me. Thank you to all my fans and audience members for cheering me throughout these 14 weeks. Finally, I would also like to say a huge thank you to my family and friends especially my father who has been there for every rehearsal and Jhalak Dikhhla Jaa shoot no matter what the situation was.”

While talking about the Super Finale of Jhalak Dikhhla Jaa Reloaded, Manisha Sharma, Weekend Programming Head- COLORS said,” I would like to congratulate Faisal Khan for his well-deserved victory on Jhalak Dikhhla Jaa Reloaded. Each and every contestant this year did a praiseworthy job by using the Reloaded theme seamlessly into their performances. The season would not have been a success without the charm of the judges and dance gurus along with our charismatic host who are an indispensable part of our Jhalak family.”

Myleeta Aga, SVP and GM BBC Worldwide India continued by saying,”Jhalak Dikhhla Jaa Reloaded completely revamped itself with a number of features. This season, from daring performances to the introduction of a Spotlight and Insta Call, the show broadened its horizon with the judges and dance gurus who brought the show to touch newer heights. Hearty congratulations to all the contestants and choreographers who coupled with their effort and determination have helped to undoubtedly reload this season of Jhalak Dikhhla Jaa”.

The biggest dance reality show in India, Jhalak Dikhhla Jaa Reloaded came to an exciting close that featured a fantastic array of daring acts that pumped up the adrenaline level on the stage! Armored with a unique prop and dazzling costumes, the foursome performed on the fan favorite relay act. Dance guru and Happy Dance aficionado Ganesh Hegde performed with the finalists on a battle themed act that mirrored the quartet’s fight to attain the trophy. Audiences will also be in for a treat to see some of their favorite ex-contestants Radhika Madan, Scarlett Wilson, Ashish Chowdhry, Subhreet Kaur and Raftaar joining in the show’s festivities. Jhalak Dikhhla Jaa’s very own quirky host Manish Paul finally had his dream come true when he got the chance to shake his ‘Kamar’ with Malaika Arora Khan and Lauren Gottlieb as they played coy to Manish Paul’s bashful looks.  To top it all off, Shahid Kapoor tugged the audience’s heartstrings with an energetic performance on the song,’Aaja Aaja Dil Nichode’ adding a touch of whimsy to the already jam-packed finale extravaganza. Comedy royalties of Comedy Nights Bachao decided to add a dose of humor to the show as they poked fun at some of Jhalak Dikhhla Jaa Reloaded’s past moments. As Jhalak Dikhhla Jaa Reloaded comes to a close after 14 weeks, it was a sight to remember that made it an unforgettable night!