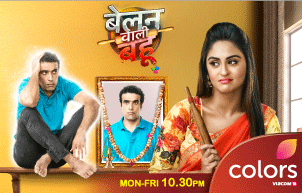 Mumbai, January 08, 2018: A goofy yet loving ‘bahu’, her untiringly unhappy husband, a dysfunctional albeit hilarious family and the pivotal role of a ‘belan’ will now get added to your late-night entertainment-diet! Known to create divergent content for its discerning viewers, COLORS is set to launch an engaging narrative, Belan Waali Bahu –  a comic-drama giving a peek into human impulses and tendencies. Produced by Shoonya Square, the show is directed by Deven Bhojani and helmed by Dheeraj Sarna (co-producer, writer and lead actor) and Ved Raj.  Belan Waali Bahu traces the lives of a mismatched couple, Roopa Awasthi and Amarnath and how an ordinary item like a belan (rolling pin) changes life as they know it.  The comic capers of the Awasthi family come to life on 15th January 2018 and will air every Monday to Friday at 10.30pm only on COLORS.

Elaborating on the concept, Manisha Sharma, Programming Head, COLORS said, “One of the most important part in every household is the Belan, so please don’t take it lightly or for granted. Often many men don’t use a belan but love to have rotis. Adding a little humor to this concept, Belan Waali Bahu narrates a story of Amarnath who always took his wife Roopa for granted and the famous belan never existed for him. Belan is mightier than the sword it can feed you or kill you but in our show it kills and believe me it will make the viewers die laughing. We promise a first of its kind show that highlights the dynamics between a dead husband, wife and a belan.”

The immensely popular television diva Krystle D’souza sports a never-seen-before look as she essays the role of the bahu, Roopa Awasthi while Writer & Producer turned actor, Dheeraj Sarna plays the role of the protagonist – the ghost of her late husband, Amarnath Awasthi.

Playing the role of the clumsy-yet-loveable wife – the ‘Belan Waali Bahu’ – Actress Krystle Dsouza said, “I am actually a lot like my character Roopa; many know me as a sophisticated girl who is always well-prepared for everything she does, but what they don’t know and have never seen is my absolutely clumsy side. With Belan waali Bahu, I’m extending my acting prowess beyond serious roles and trying my hand at comedy! So far it has been amazing and I am truly enjoying every day at work. which has turned out to be a very serious business! I’m fortunate to be working with comedy stalwarts like Dheeraj Sarna, Sudhir Pandey, Bhavna Balsavar and Deven Bhojwani from whom there’s so much to learn. This concept is novel and interesting, and I hope my fans and viewers appreciate my new avatar.”

Speaking about the show and his character, Actor, Writer and Producer Dheeraj Sarna said, “Writing has always been my passion. When I started illustrating Amarnath’s character, it somewhat grew on me. Though we auditioned many actors, but somehow, I realized nobody was able to envision the role as I had it in my mind. And as luck would have it, my team was also convinced that I should play the character myself! Amarnath is neither your typical romantic hero nor an egotistical male; he is a simple man who is never at peace and is perpetually frustrated. The show has a unique storyline; that coupled with the chemistry of all the characters will surely keep the viewers in splits.”

It is said a girl’s life changes when she gets married but this unique tale with a twist is about the life of a girl changing when her husband dies and turns into a ghost! Along with Krystle D’souza and Dheeraj Sarna in the lead roles, the show will feature stellar pillars of comedy like Sudhir Pandey, Bhavana Balsavar, Mushtaq Khan, Sikandar Kharbanda, Parijat, Shraddha Jaiswal and Sunayana Fozdar in key roles.

Embark on a hilarious journey with Roopa and Amarnath; Watch Belan Waali Bahu. Starting 15th January 2018, every Monday to Friday at 10.30pm only on COLORS.

About ‘VIACOM18’:
Viacom18 Media Pvt. Ltd. is one of India’s fastest growing entertainment networks and a house of iconic brands that offers multi-platform, multi-generational and multicultural brand experiences. A joint venture of Viacom Inc. and the Network18 Group, Viacom18 defines entertainment in India by touching people on air, online, on ground, in shop and through its cinema.