Media
Manik Paul shines as the powerhouse winner of India’s Got Talent! 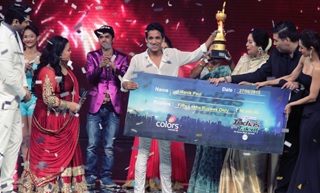 ~ Pride of Kolkata walks home with prize money of Rs.50 Lakhs, a Maruti Suzuki car and a specially crafted India’s Got Talent trophy ~

Mumbai, June 27, 2015: After weeks of showcasing the hard work, grit and determination of gifted artists from the nooks and crannies, India’s Got Talent, tonight reached its crescendo. The finale brought together a range of unique and contemporary talent from amongst whom Manik Paull from Kolkata was declared as the winners who wowed not only the judges but also the nation at large. Cheering the finalists and joining them in for a volley of special performances were Faisal Khan, Raftaar and Elli Avram. As winners of this grand season while presented new-age talent, Manik Paul was awarded a cash prize of Rs. 50 Lakhs, a Maruti Suzuki car and a specially crafted trophy engraved with the signatures of jury members Kirron Kher, Malaika Arora Khan and Karan Johar.

A mama’s boy through and through, Manik Paul has dedicated his gymnastic passion to his mother for whom he wishes to build a house. A natural audience stunner, Manik Paul has received accolades from not only the jury but also his idol Remo D’souza who was thoroughly impressed with his talent when he visited the show. Moments where his grit, talent and simplicity have shone through, have touched the hearts of millions of viewers across the world making him a frontrunner from the get go. It comes as no surprise then that, as the journey reaches its pinnacle, Manik has emerged at the top.

Talking about his win, Manik Paul said, “India’s Got Talent has made my biggest dream come true. The journey has been an uphill task, but it was this final leg that had me praying for this incredible moment. India’s Got Talent has given me the confidence that what we do is truly entertaining and I cannot wait to take my talent across the globe. I would like to express my heartfelt gratitude to the jury who has always encouraged me and to all my supporters without whom this feat would not have been possible. I would also like to congratulate all my co-finalists; India’s Got Talent has truly changed our lives for the better.”

Speaking about the show, Manisha Sharma, Programming Head – COLORS, said, “This year, with India’s Got Talent, our aim was to find unique, new-age talent with the ability to inspire. The feedback that we have received through the weeks is testimony that we have achieved what we set out to do; in fact, it encourages us to strive harder to find the most outstanding talent with the potential to impress the world. We would like to congratulate Manik Paul for being the winner and wish him all the best for the future.”

Marking the end of yet another season of yet another successful season of India’s Got Talent, judge Karan Johar said, “Being a part of India’s Got Talent is always a great privilege and honour. This season, especially, was outstanding with the kind of talent we have witnessed. I wish they use this platform as a stepping stone to achieve success in their lives.” Summarizing the journey, Judge Kirron Kher added, “Every year, I am surprised to see the caliber of excellence that the contestants project. This season, stood out with the sheer variations of talents foraying their way to the spotlight.” Judge Malaika Arora Khan said, “It feels like just yesterday when we kick-started India’s Got Talent and first found ourselves being blown away by the incredible talent. Every talent has been a complete treat to watch and I cannot help but feel a little sad that the show is coming to an end.”

As the contestants prepared for the final leg of the race to the top, a volley of supporters from the world of entertainment added to the glamour quotient of the evening. While the X1X Group and Beat Breakers joined hands with Faisal Khan, rapper and Jhalak Dikhhla Jaa contestant Raftaar performed with Harmanpreet Kaur and Parry G. Further, finalists Yogeshwari Mistry and Manik Paul joined hands to showcase their camaraderie while giving tough competition to choreographer Tushar and Ellie Avram. With entertainment reaching its pinnacle, the judges and hosts also helped take this Grand Finale a notch higher. Host and television hottie Sidharth Shukla danced alongside judge Kirron Kher to evergreen songs from the black-and-white films era. Judge Malaika Arora Khan showcased her dancing prowess through a solo act highlighting 3 different dance forms while co-judge Karan Johar presented a fun-filled gag. Host Bharti Singh, similar to her on-screen persona, was seen continuing her hunt for her Mr. Right as she sifted through the cut-outs of various faces that caught her fancy this year including Varun Dhawan, Ranbir Kapoor and Remo D’Souza before setting her eyes on her co-host Sidharth. But the true highlight of the evening was when Manik Paul was announced as the winner bringing tears of joy and excitement to many eyes.