Media
The Manjhi Anthem, An Inspiration To All 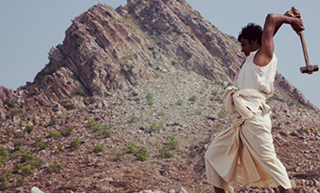 Mumbai, August 12, 2015: Viacom18 Motion Pictures has released a powerful song titled Dum Kham from their upcoming biopic Manjhi the Mountain Man which mirrors the Do -It -Yourself spirit that Shri Dashrath Manjhi embodied. This anthem holds a strong significance as we celebrate Independence Week and is peppy yet inspirational, defining the power of the human will and a man’s victory against a mountain.

The video and the lyrics highlight challenges and encourage the notion of never giving up. The song has been sung by Divya Kumar, composed by Hitesh Sonik and lyrics by Kumaar.

A film by Ketan Mehta starring versatile actor Nawazuddin Siddiqui in and as Manjhi along with Radhika Apte playing his beloved wife, this biopic is the story of an ordinary man who performed the extraordinary.

The Manjhi Anthem showcases the story of Dashrath Manjhi and how he accomplishes the impossible feat of carving a road through a huge mountain. The video is a beautiful amalgamation of prominent scenes of Manjhi’s life, aptly showcasing his struggles and triumphs.

Presented by Viacom18 Motion Pictures in association with NFDC and Maya Movies – ‘Manjhi – The Mountain Man’, releases on August 21st, 2015.