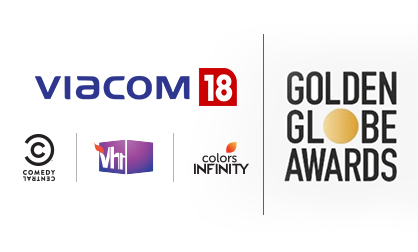 ~ Catch the 77th Golden Globe Awards exclusively on Vh1, Comedy Central and Colors Infinity on Monday January 6, 2020 at 7:30am, and repeat telecast at 9pm ~

~ Competition gets fierce as ‘The Irishman’ bags five nominations, while stand-out series ‘Chernobyl’ gets four and ‘Game of Thrones’ claims one ~

~ Tom Hanks to be honored with the Cecil B. deMille Award and Ellen DeGeneres to become the second ever recipient of the Carol Burnett Award ~

National, Friday January 3, 2020: Kickstarting the decade with a big bang, Viacom18’s English entertainment channels will showcase the coveted movies and television awards – 77th Golden Globe Awards. Hosted by the sensational Ricky Gervais for a record fifth time, the gala held at the Beverly Park, California will be simulcasted exclusively on Vh1, Comedy Central and Colors Infinity on Monday January 6 at 7:30am IST, with a repeat telecast at 9pm.

Speaking about the awards Hashim Dsouza – Head of Programming, English Entertainment, Viacom18, said, “Marking the start of a new decade 2020 looks to be a promising year for entertainment, as we step into another year full of exciting shows, films and events to look forward to. Considered as one of the most respected award ceremonies in film and television, attended by the biggest names in the industry, the Golden Globes celebrates and commemorates the best of the year gone by. The popularity of international awards amongst Indian viewers is palpable, and the epic showdown across categories in the 77th edition of the Golden Globes makes it a must-watch for fans. With viewers rooting for their favorites, films like Joker, The Irishman and shows like Chernobyl, Unbelievable and The Crown with multiple nominations, will surely go down to the wire making it almost impossible to predict the winners.”

Carving a niche in Hollywood as well as raking in box-office collections, Tom Hanks has multiple Oscars, Emmys and Golden Globe awards under his belt. At this year’s ceremony he will be bestowed upon the Cecil B. DeMille Award – a special, prestigious award for outstanding contributions to the world of entertainment. And Ellen DeGeneres will receive the coveted Carol Burnett Award named after the legendary Carol Burnett and presented annually to an honoree who has made outstanding contributions to television on or off the screen.

Witness the starry world of film and television merge at the 77th Golden Globe Awards, simulcast exclusively on Vh1, Comedy Central and Colors Infinity on Monday January 6 at 7:30am with repeat telecast at 9pm

Vh1 is India’s only 24-hour International entertainment channel that provides viewers with their daily dose of International music, Hollywood, Pop culture and Lifestyle. Vh1 is a part of Viacom 18. Since its inception in January 2005, Vh1 has grown tremendously reaching over 75 million people in India. Vh1 India has grown the English music audience by 180% in the last 5 years alone. The channel has pioneered the heady combination of programming content and lives on ground activities. Vh1 has been committed to bringing to Indian audiences the best of international music genres like EDM, punk, rock, reggae, hip hop, pop, jazz etc. Through their international properties like ‘Rock Rules’, ‘Jazz Masters’, ‘Hip-Hop Hustle’ & ‘Handpicked’ Vh1 has successfully brought down, artists such as Anoushka Shankar, Wyclef Jean, KardinalOffishall, Mobb Deep, Flipsyde, Jazz legend Herbie Hancock & chart topper Simon Webbe. From 2011, Vh1 India also secured a multi-year deal for Music’s Biggest Event – The Grammys. This deal has spearheaded Vh1 as the No.1 viewing destination for the youth in the English entertainment and lifestyle space. Globally, Vh1 is available across 148 million households in over 124 countries/territories.