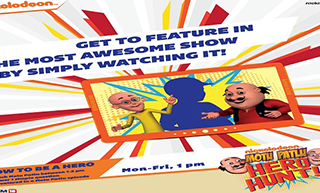 Your chance to stardom is just a question away

National, May 2014: Summer holidays are here and all set to calm the summer heat this May is Nickelodeon’s “Motu Patlu Hero Hunt”. This unique campaign will see Motu Patlu set out to find the star of their special episode wherein the winner get an opportunity to be a part of the show. Watch the idea come to life, as Nickelodeon aims to give children a once in a lifetime opportunity to be with their favourite characters in their animated avatar. How do you get there? To participate all you need to do is sit back at home and watch the Motu Patlu episodes between 1:00pm-2:00pm…answer one simple question and get to be on television.

The fun doesn’t end there! Motu Patlu will also be travelling to Mumbai, Delhi, Ahmedabad, Chennai, Baroda and Nagpur wherein kids can watch Motu Patlu live with Motu Patlu have a blast with the awesome twosome, while they search for their hero.

Based in Furfurinagar their show is a comedy of errors where the duo land into hilarious situations, later rescuing themselves merely by luck. Motu and Patlu have been ruling the hearts and minds of kids across the country through their funny escapades on Nickelodeon. This summer, the duo is all set to give kids a memorable summer outside the television in their cities.

About Nickelodeon
Nickelodeon, one of India’s leading kids’ entertainment brand and part of the Viacom18 Media Pvt. Ltd, is available in over 100 million households in the country. The Nickelodeon cluster in India boasts of a bouquet of differentiated channels that cater to kids from tots to teens – Nick, Sonic and Nickelodeon (with 2 programming blocks i.e. Nick Jr./ Teen Nick). Nick Jr. (www.nickjrindia.com), which is ‘the smart place to play” believes that ‘education’ and ‘entertainment’ go hand-in-hand and is aimed at young parents and pre-schoolers. Internationally acclaimed shows like Dora the Explorer, Bubble Guppies, Wonder Pets, Team Umizoomi and Go Diego Go foster motor, memory, maths and language development in a child. The Nickelodeon channel also caters to teenagers in the latter half of the day with the Teen Nick block which showcases international sitcoms such as ICarly, Victorious and Drake and Josh. The Nickelodeon cluster has an ecosystem that extends beyond television into Consumer Products, on-ground and digital platforms.