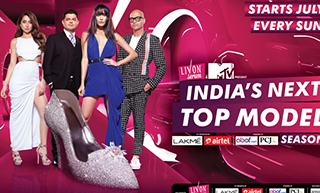 June 29, 2016, Mumbai: MTV, the universe of the young and the creator of cutting edge content brings back the era of supermodels on television with the second season of INDIA’S NEXT TOP MODEL. CBS STUDIOS INTERNATIONAL has once again licensed the India format rights for the reality competition series AMERICA’S NEXT TOP MODEL to Mumbai-based BULLDOG MEDIA & ENTERTAINMENT. INDIA’S NEXT TOP MODEL will be produced by Bulldog and will premiere July 10 at 7pm only on MTV.

Sensational top model and actress, Lisa Haydon will Host, ace photographer, Dabboo Ratnani will judge, both, fashionista Anusha Dandekar and grooming expert, Neeraj Gaba will mentor the girls as they reprise their roles for the second season of INDIA’S NEXT TOP MODEL. With Livon Serum as the Title Sponsor and Lakme and Airtel as the Co-Presenting sponsors, the show also has abof.com, and PC Jeweller as the Powered by sponsors, while amanté is on board as the Associate sponsor.

The upcoming season of INDIA’S NEXT TOP MODEL follows the journey of thirteen beautiful young girls as they transform into ramp- ready professional models. Premiering on July 10 at 7pm, the highly anticipated dramality series will be upping the fashion game on Indian television by bringing oodles of style, sexiness and oomph. Having garnered a tremendous response in the first season, the fashion franchise will see young models strutting it out to win the coveted title.

Ferzad Palia, Head – Youth and English Entertainment, Viacom18 commented, “INDIA’S NEXT TOP MODEL is a global platform that allows young women to express who they are through fashion. It’s a format that has enjoyed the status of being the audience favorite on MTV for its cutting edge fashion and drama. In its second season, viewers are in for a delightful experience as we are setting about to transform the ordinary into the extraordinary and in some ways questioning and redefining existing beauty norms in India.”

Akash Sharma, Co-Founder and Executive Producer, Bulldog Media & Entertainment commented, “We are immensely excited to bring the ‘America’s Next Top Model’ format to India for a second season. Specially adapted for the Indian audience, INDIA’S NEXT TOP MODEL will look for the fresh faces, one amongst who can be the next supermodel and make India proud on the global platform. In the U.S., the success of the franchise is evident with ‘America’s Next Top Model’ recently renewed for a 23rd season and we aim to replicate the same. We are proud to be associated with CBS Studios International and MTV India and are confident that this show will continue to open a new era of entertainment programming.”

Roxanne Pompa, Vice President International Production and Sales, CBS Studios International, added “The ‘America’s Next Top Model’ format continues to entertain audiences all around the world and we are excited to be working with Bulldog Media & Entertainment and MTV India to deliver a second season, with the customary ‘Top Model’ style, glamour and entertainment, for Indian audiences to enjoy.”

Ms. Anuradha Aggarwal, Chief Marketing Officer, Marico Limited says, “Livon Serum personifies values of being vibrant, vivacious, always stylish and unstoppable for a girl who believes she is fabulous and always wants to be in the spotlight with salon finish hair. Livon’s new proposition seamlessly fits into the format of the iconic show, ‘INDIA’S NEXT TOP MODEL Season 2’ on MTV which is all about giving spotlight moments to young girls. Through this collaboration we aim to reach out to our core TG; young, trendy, college going girls of today. It all about giving them the ever so perfect, camera-ready hair and offering them real life modeling projects which will help them hone their skills of being a perfect model.”

To promote the glamorous season 2 of INDIA’S NEXT TOP MODEL and to announce the return of India’s very own fashion-based reality show, MTV has planned a impactful 360 degree marketing plan with high media buzz which includes television, radio, print and digital (mobile and web) across metros and non-metro target markets. Along with a widespread outdoor campaign and radio plan focusing on the show’s concept, MTV will be driving fan engagement through multiple activities on digital assets using live Q&A’s with the judges, mentors and contestants.

MTV has partnered with Twitter for this show to enhance viewer engagement through some of their never seen before services in India. These include activating fan interaction through the newly launched Twitter Blue Room as well as the exclusive camera app on Twitter to make relatable and engaging digital content on the platform. The contestants will undergo a full scale Twitter workshop to fully utilize the power of the medium for fan interaction. Through all these initiatives, MTV India and Twitter want to ensure that the Indian edition of the global franchise is the most talked about property on the platform.

Most interestingly, MTV will be using the world’s fastest growing platform, Snapchat, in a way no show has every before used for showcasing an exclusive sneak peek of the look and feel of the show as well as real time reactions on MTV’s Snapchat handle MTVINDIA. The channel will also be using the bastion of fashion on social media – Instagram – to showcase an exclusive video wherein the best looks from the show get highlighted every week.

About MTV
MTV, world’s premier youth brand, is a dynamic and a vibrant blend of music and pop culture. With a global reach of more than half-billion households, MTV is a cultural home to the millennial generation, music fans and artists. 35 MN fans following MTV across show pages on social media have made the brand #1 in social influence as well. MTV products are available across 13 unique categories with targeted brand licensing. In 2015, MTV also launched its first ever café in the world, FLYP@MTV at New Delhi in India. MTV has a buzzing MTV Live business with properties like MTV Video Music Awards and MTV Bollyland. Aiming to entertain, lead and collaborate with young people through its evocative communication and youth relevant shows like Roadies, Coke Studio@MTV, MTV Unplugged, MTV Girls on Top, MTV Love School and keep them engaged through various cause led initiatives such as MTV Rock the Vote and MTV The Junkyard Project. For information about MTV in India, visit www.mtv.in.com.

About Bulldog Media & Entertainment
Bulldog Media & Entertainment, founded in 2007 by Akash Sharma and Ramit Bharti Mittal, is one of the leading content providers and production companies in India. A pioneer in worldwide format acquisitions, they are the entity behind bringing successful entertainment franchises to India like ‘Are You Smarter Than A 5th Grader?’, ‘Beauty and The Geek’, ‘People’s Choice Awards’ and now ‘America’s Next Top Model’. Equipped to offer world-class creative, development & production services, Bulldog is one-stop destination for high-quality interactive & entertaining shows for TV, mobile, and the internet. Headquartered in Mumbai, the company also offers content services such as multi-platform Distribution, Interactivity, Merchandising, Digital Marketing, and Brand Solutions for the Indian marketplace.