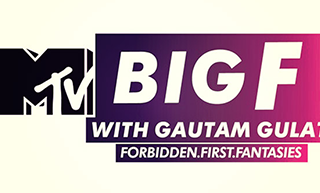 ~A ten episode series, the show will focus on secret encounters & forbidden fantasies of the youth and will see the debut of Gautam Gulati as a TV host~

MUMBAI, 5th October, 2015: MTV, the iconic youth brand that has time and again defied norms, pushed boundaries and created shows that understand the psyche of the Indian youth, is all set to launch a brand new show ‘MTV Big F’ which is bound to shatter taboos in a creative way. Giving voice to ‘forbidden fantasies’ the show is all set to showcase real life stories about secret fantasies and forbidden encounters, which the society is often keen on hiding. Launching on 11th October at 7PM, the channel has roped in popular youth icon, the extremely hot and dashing actor Gautam Gulati as the host for this one-of-a-kind ten episode series.

Gautam Gulati, who won hearts with his exuberance and charisma through several stints as an actor and on reality shows in the past, will be, for the first time ever, be seen hosting a TV show. Upping the hotness quotient of the show by presenting the audience with enactment of exciting real life stories from the heartland of the country, Gautam will bring his naughty charm to the show. Adding oodles of oomph and glamour, the actor will be bringing to life the first fantasies of young people. Targeted at youngsters, the show will be a sensual depiction of some of the hole-and-corner tales of the youth that have long been kept under wraps.

Speaking about the unique concept of the show, Shalini Sethi, Programming Head – MTV, said, “MTV understands the youth of today – their interests, their aspirations, their sorrows and their desires. One key aspect of being young is the whole journey of discovering yourself and expressing your desires in different ways. Most people shy away from even talking about this in polite society, but for us at MTV, its essential that we address these desires and fantasies that young people have. MTV Big F is a show that sheds light on a very basic human urge in a non-judgmental yet bold manner – just the way the youth want us to look at them – without any prejudice.”
She further adds, “Secret desires are not something that are openly discussed in society but the reality is that the youth of today is not afraid to speak their minds and talk about their feelings. They have the courage to stand for what they believe in and MTV Big F is going to portray exactly that by breaking stereotypes. I’m sure that our discerning young viewers will feel a sort of kinship with the characters they will see unfolding on the screen.”

Talking about becoming the host for the first time ever with MTV Big F, Gautam Gulati said, “After having done fiction and reality shows, the prospect of becoming a host was an exciting one. And when MTV came to me with this interesting concept, I didn’t have to think to long about it. I knew I wanted to do it. Viewers will also get to see me in a slightly naughty avatar as MTV Big F is a show that talks about the desires of young India and gives voice to those hidden fantasies and secret encounters that make life so exciting. The show’s concept of bringing the untold tales of the youth to life is very unique and is sure to become a rage among youngsters.”

MTV Big F draws attention to the dreams and fantasies that young people have and gives a voice to these fantasies. The show recreates real-life situations where youngsters have been shown breaking stereotypes and standing up for their beliefs. Like always, treading the untrodden path, MTV brings a sensitive issue and showcases it on Indian television through tasteful representation. MTV Big F will give the audience a glimpse of their own experiences through some of the most exciting and adrenaline- filled anecdotes. The show which is all set to go on air on 11th October 2015 at 7 PM is sure to get the nation talking about secret encounters!

About MTV
MTV, world’s premier youth brand, is a dynamic and a vibrant blend of music and pop culture. With a global reach of more than half-billion households, MTV is a cultural home to the millennial generation, music fans and artists. 32 MM fans following MTV across show pages on social media have made the brand #1 in social influence as well. MTV products are available across 35 unique categories with targeted brand licensing. MTV also has a buzzing MTV Live business with properties like MTV Video Music Awards and MTV Bollyland. Aiming to entertain, lead and collaborate with young people through its evocative communication and youth relevant shows like MTV Roadies, MTV Coke Studio, MTV Unplugged, MTV Rock the Vote, MTV Kaisi Yeh Yaarian etc. For information about MTV in India, visit www.mtv.in.com.