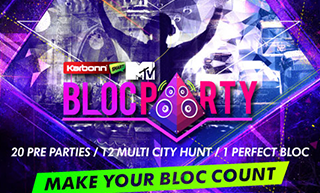 NATIONAL, March 16, 2015: The verdict is in! After holding exclusive pre-parties in twelve different cities, the hunt for the perfect bloc for the Karbonn Smart MTV Bloc Party is finally over. The party people have voted for Juhu Bloc in Mumbai to host the Bloc Party where MTV will pack in a crazy sundowner by the beach and massive after-parties spread all across the city-bloc. MTV brings together more than 30 world-class DJs to spin the music for the Karbon Smart MTV Bloc Party. The 2 day dance music festival set smack dab in heart of party capital Mumbai will be headlined by DJ BL3ND and BASSJACKERS, and will feature Rewire & Varski, Nucleya, Ash Roy, Calm Chor, Ankytrixx, Reggae Rajahs, Lost Stories, Su Real and many more spinning music right across the bloc on April 11 and 12,2015. Hosted by MTV’s music man Nikhil Chinapa, MTV is all set bring the dance music scene alive with more boom, more bang, more artists and more craziness than ever!

Living up to theme of MTV’s Bloc Party – more bang and more boom, MTV is bringing to India for the first time DJ BL3ND to headline the MTV’s Bloc Party. This Los Angeles native, DJ BL3ND has a staggering 360 million YouTube views and more than 4 million Facebook followers for his crazy videos and electrifying live sets. Few electronic artists can match the stage presence and energy of DJ BL3ND, something that his legion of super-fans (popularly known as BL3NDERS) would vouch for. Over the years, his success has been documented by everyone from Billboard, to SoundCloud, to DJ Mag. He’s the record-holder on Billboard’s Uncharted Chart, holding the top spot for 62 weeks; and was also named SoundCloud ‘Artist of the Year.’ Mumbai is definitely going to go crazy for this man behind the crazy mask!

And, joining him are the American DJ and Producer duo who share a great passion for house music, BASSJACKERS. Comprising of Marlon Flohr and Ralph van Hilst, BASSJACKERS is known for beatport toppers like ‘Mush Mush’, ‘Hey!’, ‘Grid’ and many more. The duo have remixed for Rihanna, Enrique Iglesias and Moby; and continue to tour around the globe.

The more. The better; yes, that’s the chant of MTV’s Bloc Party. Living up to this promise, MTV is also featuring the best of Electronic Dance Music producers and DJ performers including Rewire & Varski, Nucleya, Ash Roy, Calm Chor, Ankytrixx, Reggae Rajahs, Lost Stories, Su Real and many more! On April 11th, gates open at 3PM and the party starts at the beachfront Juhu Hotel and spills out to multiple night-party blocs across Juhu. The wrist-band that the party animals will get at this gate will serve as the entry pass for all the party venues across the entire bloc. It’s a party in the heart of the city starting on the gorgeous sands of Juhu Beach – nothing like a sundowner to kick-off a party at the beginning of the summer season. So, no need to waste monies on flight-tickets, no long drives, no booking hotels, no applying for travel leave, and no backpacking trips! This is a two day dance music that comes right at your doorsteps, bang in middle of the city and is much more than incredible music. And to top it all, the party-goers will need just ONE TICKET to attend all the parties all through the bloc. They can club hop with the MTV hop-on-hop-off Bloc Party cabs which will ferry them across venues and the music travels with them to ensure a seamless party transition.

Speaking about this unique party concept Sumeli Chatterjee, Head – Marketing, Media and Insights, MTV said, “MTV’s Bloc Party brings the party right at your doorsteps in the city with not just one or two stages, but integrates the whole of Juhu bloc. Crazy audio-visuals and massive sundowner live acts by our world-class DJs that spread across both the days; young people will definitely take back happy party memories from this music festival. We are playing with concept of light and geometry that will make it a spectacular and musical sunset by the beach, and a treat in the Mumbai summer. And, to top it all, with just one ticket one can ride on a fun club-hop post the sunset, where music follows your footsteps.”

Speaking on the association with MTV Bloc Party, Shashin Devsare, Executive Director, Karbonn Mobiles says, “MTV has the finger on the pulse of the youth and by partnering with the channel on exclusive concepts like MTV Bloc Party, we are looking forward to reaching out to the urbane youth who prefers to be connected with their peer groups 24X7 and enjoys innovative technology. By combining cutting-edge mobile technologies with the best of music & dance experience, we at Karbonn endeavour to bring the consumers larger-than-life opportunities of entertainment, fun and engagement.”

More parties, more music, more bang, more boom! This year Karbonn Smart MTV Bloc Party promises to be a celebration of life with the best of dance music, the most amazing audio-visuals, the liveliest party vibe and non-stop fun. The idea is to party like you’ve never partied before! The tickets will be available on www.insider.in . Mumbaiites, it’s time to gather all your buddies and head to the party of the year…THE MORE. THE BETTER!

ONE BLOC | ONE TICKET | MULTIPLE PARTIES | BEST. TIME. EVER.

MTV, world’s premier youth brand, is a dynamic and a vibrant blend of music and pop culture. With a global reach of more than half-billion households, MTV is a cultural home to the millennial generation, music fans and artists. A 30 MM fan following across show pages on social media has made MTV the #1 brand in social influence as well. MTV products are available across 35 unique categories with targeted brand licensing. MTV also has a buzzing MTV Live business with properties like MTV Video Music Awards and MTV Bollyland. Aiming to entertain, lead and collaborate with young people through its evocative communication and youth relevant shows like MTV Roadies, MTV Coke Studio, MTV Unplugged, MTV Rock the Vote, MTV Kaisi Yeh Yaarian etc. For information about MTV in India, visit www.mtv.in.com.