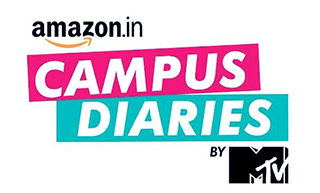 NATIONAL, August 14th, 2015: MTV, India’s most powerful and iconic youth brand is not only irreverent, fun, innovative and passionate but is also reckoned as the most trendsetting brand of the nation. On the occasion of Independence Day, Amazon Campus Diaries by MTV, India’s largest and coolest college connect platform will be collaborating with a non- profit organization, Teach For India, in order to awaken the youth of the country to the problem of inequality in education. This Independence Day, Amazon Campus Diaries by MTV, the 300 strong campus connect program will strengthen its talent pool through a creative conglomeration with Teach For India by bringing young minds face- to- face with the alarming issue of education inequity sweeping the nation.

Amazon Campus Diaries by MTV is a massive college connect initiative that aims at connecting colleges and students across the length and breadth of India. The initiative partners with youngsters to capture their campus stories, showcase their talent and creativity, while giving them an interactive platform to create, connect and collaborate with each other. The platform lives 365 days through TV, web, mobile and social where content and experiences are curated with the college students. Whether it is the weekly dose of #wackywednesday or celebrating the quirk of #firstdayatcollege, Amazon Campus Diaries by MTV resonates the vibe and spirit of the campus across India through the year.

Announcing the latest initiative by Amazon Campus Diaries by MTV, Sumeli Chatterjee, head of marketing, media and insights for MTV India and MTV Indies said, “College life is full of optimism, opportunities and loads of fun. But, in midst of all the pranks, freshers’ parties and fests…youth today also are hyper aware and want to contribute to a better tomorrow. Our partnership with Teach for India will empower the youth to be the change agents. Access to Education for everyone has always been a challenge as number of teachers have been inadequate. Through our partnership with Teach for India we want to connect with the wide network of 300 colleges under MTV’s Campus Diaries and give them an opportunity to be part of the movement to dream for a better and more educated India. This will also provide a unique opportunity to the colleges to experience the grassroots reality of schools and understand the challenges for the education system. Adding to all this will be the massive social and TV footprint of MTV, which will aim to raise the awareness of the youth to join hands to battle illiteracy and better the education system in India.”

After the completion of the Program, the Campus Diaries volunteers will be submitting a white paper on their experience with educational inequity and their individual vision to address the issue with regards to their Teach For India shadow program. All the participants will be certified by MTV and Teach For India, on completion of the program. This Fellowship Program will bring together young minds to raise awareness around the grave issue of educational bias surrounding the nation.

Meghna Rakshit, Communications Director – Teach For India said, “We are very excited to invite young college students from across the country to shadow our Fellows and join the movement towards educational equity. When all these bright minds come together, there will surely be innovative solutions to this complex problem.”

“We are very excited to engage with the youth of this country through the Amazon Campus Diaries. This gives us a platform to encourage young minds to think innovatively and use their creativity and humility for a good cause,” said Mr. Manish Kalra, Director Integrated Marketing, Amazon India.

Amazon Campus Diaries by MTV has not only been successful in engaging the youth of the country through the quirky Freshers’ Parties and dance mob- offs but has also won critical acclaim at the national and international level such as Gold at Goafest Abbys and a Gold at ACEF. MTV Campus Diaries is one of 80 cases across Asian markets that are getting presented at the highly acclaimed Appies Asia (Singapore). This year, it has teamed up with Teach For India to spread awareness about the social issue of educational inequity. MTV will be making young college- goers aware about the initiative undertaken and encouraging them to do their bit to bring about an improvement.

MTV, world’s premier youth brand, is a dynamic and a vibrant blend of music and pop culture. With a global reach of more than half-billion households, MTV is a cultural home to the millennial generation, music fans and artists. A 33 MM fan following across show pages on social media has made MTV the #1 brand in social influence as well. MTV products are available across 35 unique categories with targeted brand licensing. MTV also has a buzzing MTV Live business with properties like MTV Video Music Awards and MTV Bollyland. Aiming to entertain, lead and collaborate with young people through its evocative communication and youth relevant shows like MTV Roadies, MTV Coke Studio, MTV Unplugged, MTV Rock the Vote, MTV Kaisi Yeh Yaarian etc. For information about MTV in India, visit www.mtv.in.com.