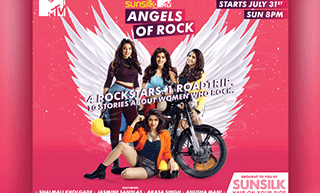 ~Sunsilk joins hands with MTV for a first of its kind musical journey which is by women, of women, made with love for everyone~
~The extraordinary journey of ‘Sunsilk & MTV present Angels of Rock’ begins on 31st July at 8 PM only on MTV~

MUMBAI, 13th July, 2016: MTV, the universe of the young that has been a trendsetter at creating edgy content, is ready to embark on an impactful journey to celebrate women with its brand new show, which is going to make every woman and man of India sit up and take notice – ‘Sunsilk & MTV present Angels of Rock’ – a show that celebrates the women, their stories of empowerment, self-belief and their incredible journey. Embodying the spirit of sisterhood in all its hues and colors, the show will see four rock- stars – Shalmali Kholgade, Anusha Mani, Jasmine Sandlas and Akasa Singh riding across the country to inspire and draw inspiration from the nation’s women. The show will be going on air from 31st July 2016, every Sunday at 8 PM only on MTV.

‘Sunsilk & MTV present Angels Of Rock’ is a concept that is unique in every way – from a female led cast to a female crew filming it, the show aims to showcase the power of the woman of India today. The focus of the show is to celebrate stories of achievement of women across cities, towns and villages of India. It is a show that captures the essence of rural and urban India through these remarkable stories of women who have made their mark with their self-belief and sheer power of will.

The Angels – Shalmali Kholgade, Anusha Mani, Jasmine Sandlas and Akasa Singh – who have each picked their own stories which have inspired them, will travel from the glam capital of the country Mumbai to the Wagah Border with multiple stopovers on the way to meet interesting women. The angels will meet incredible women such as the female fire-fighters of Jaipur, the women running an all-woman radio station in a village in Gujarat, the female rickshaw drivers of Haryana in their famed Gulabi Autos, an inspiring young lady sarpanch, and many more incredible women with extraordinary stories and present to us original songs in each episode which capture the spirit of these stories.

Elaborating on the unique concept of the show, Ferzad Palia, Head – Youth and English Entertainment, Viacom18 said, “MTV always has its finger on the pulse of the youth. And over the last several months, our young viewers have appreciated the way MTV has taken the lead on creating content that showcases women in strong roles – be it through MTV Girls On Top or India’s Next Top Model. And now, we’re going a step ahead and celebrating womanhood in all its glory by bringing our viewers a unique proposition in the form of Sunsilk & MTV present Angels of Rock – a show that’s by the women, of the women but for everyone. The show focuses on inspiring stories of real women blended with travel, fun, and a whole lot of music created by four amazing singers. Sunsilk & MTV present Angels of Rock is a show we are really excited about and proud of and I’m sure our young viewers will also find it inspiring as the stories unfold on screen.”

Talking about this partnership between Sunsilk and MTV, Senior Global Brand Manager, Sunsilk Priyanka Singh said, “For Sunsilk, MTV is a perfect fit to be associated with. MTV is the no.1 youth brand and Sunsilk has been the chosen brand for the young spirited woman of this country for over 75 years! It’s been a trend setter brand that has broken stereo types. Unilever’s biggest Global hair care brand, Sunsilk understand the young Indian girl, her trials and her victories. Sunsilk believes in empowering her to be ‘ready for life’ and not just her hair! By fuelling conversation that is important to her and giving her access to an ecosystem where she can share and bond. A Sunsilk girl embodies confidence, positivity, drive to follow her ‘spark’ and most importantly, spirit of ‘sisterhood; the girl gang. The very qualities that our Angels; Shalmali, Anusha, Akasa and Jasmine represents. We are proud of this association which will spark of conversations between young Indian women of stories self-belief and via this show we will celebrate them, while doing this all along in the Sunsilk way that is full of joy, colour & music.”

Sunsilk & MTV present Angels Of Rock essays to reflect the true spirit of the Indian woman and celebrate her in all her glory. The show will represent a beautiful concoction of music, adventure and woman empowerment through the riding expedition of the four angels and the crew of women filming them. MTV has partnered with Sunsilk to showcase the power of real Indian women and their potential to the world. The show will also leverage the digital space through interesting interactive campaigns to keep the viewers aware of the latest happenings in the course of the journey and to allow them to be a part of the journey in interesting ways.

About MTV
MTV, world’s premier youth brand, is a dynamic and a vibrant blend of music and pop culture. With a global reach of more than half-billion households, MTV is a cultural home to the millennial generation, music fans and artists. 35 MN fans following MTV across show pages on social media have made the brand #1 in social influence as well. MTV products are available across 13 unique categories with targeted brand licensing. In 2015, MTV also launched its first ever café in the world, FLYP@MTV at New Delhi in India. MTV has a buzzing MTV Live business with properties like MTV Video Music Awards and MTV Bollyland. Aiming to entertain, lead and collaborate with young people through its evocative communication and youth relevant shows like Roadies, Coke Studio@MTV, MTV Unplugged, MTV Girls on Top, MTV Love School and keep them engaged through various cause led initiatives such as MTV Rock the Vote and MTV The Junkyard Project. For information about MTV in India, visit www.mtv.in.com.