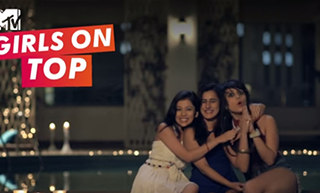 ~MTV to showcase interesting stories of struggles, inspiration and determination of young independent working women in urban India through the exciting new show~

NATIONAL, 9th February, 2016: MTV, iconic youth brand, has decided to dedicate 2016 to celebrating the power of being a woman by shattering long standing stereotypes and questioning nonsensical taboos surrounding the women in India today. And to kick-start this celebration with a bang, MTV is proud to announce a brand new show ‘MTV Girls On Top’ that is all set to redefine what it means to be an ‘Adarsh Ladki’ by showcasing the ‘young Indian girl’ in all her various avatars – from a havoc wrecking goddess to hardworking superwoman; from a devilish diva to manic pixie dream girl; from a bookish romantic to a tattooed hell-raising disc jockey.

MTV Girls on Top – a show about three not-so-adarsh-girls trying to survive in Mumbai – dealing with job issues, love issues and also domestic issues, will be going on air from 7th March 2016, from Monday to Friday at 6:30 PM only on MTV.

MTV Girls On Top is a story of three determined young girls who share an apartment in Mumbai and focuses on all aspects of being today’s modern day Indian woman. The show, a dramedy, will analyze various aspects of being an independent young woman in urban India through lenses of friendship, relationships, career, aspirations and even whims and fancies. Viewers will get to see three young women – TV Producer Isha (Played by Saloni Chopra), Tabloid Journalist Gia (played by Barkha Singh), and DJ Revati (played by Ayesha Adlakha) as they make their way through life in a ruthless city like Mumbai and how they grow stronger together as they face one difficult circumstance after another.

Commenting on the launch of this exciting new show, Ferzad Palia, EVP Viacom18 and Business Head, Youth & English Entertainment said, “With MTV Girls On Top, we at MTV, are all set to take a close look at the lives of three young women trying to make it on their own in Mumbai. The show will focus on their struggles around work, love and life, but at the same time, will also offer viewers an insight into the changing face of Indian women. They’re here to claim what’s theirs – the right to choose a career and a partner, the freedom to express themselves through their work and their style and the independence to live life on their own terms. It’s a show that will resonate with all those young women who have ever dreamed of a life outside the confines of societal norms by breaking stereotypes and questioning taboos. I’m sure our young viewers will fall in love with our three protagonists from MTV Girls On Top because somewhere they’ll find their own story within theirs.”

MTV Girls On Top is the story of every young woman who has ever moved to a big city to make her dream of being independent come true. It’s the story of a world where young woman want it all – career, love and a good life – and for a change, they can have it all – only, it comes with a bit of a struggle and requires good girlfriends to help them through it – and you know what? They’re ready for it! They’re ready to make their way to the top.

Watch the trailer of MTV Girls On Top here: https://www.youtube.com/watch?v=NvfYSTpBIjw

So come, join Isha, Gia and Revati as they make their way to the top with MTV Girls On Top on 7th March at 6:30 PM, only on MTV!