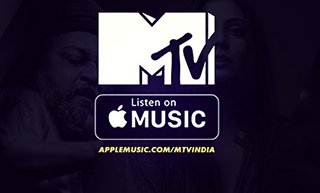 ~To curate best of Bollywood and Indian Indie playlists~

NATIONAL, xx October 2015: MTV India, the universe of the young, is all set to get India dancing to its tunes once again as it becomes the first Indian music curator for Apple Music. Thanks to MTV India, Apple Music members will now be able to access best of Bollywood and Indian Indie through regularly updated playlists. Tastemakers at MTV India are already hard at work handpicking tracks which are bound to make Apple Music the go-to destination for young India for the latest in Indian music.

MTV brought about a music revolution in India when it was first launched in the early 90s. Since then, the brand has consistently shaped the way the youth in India consumed music and is also credited with creating some of the most exciting music show formats such as Coke Studio@MTV, MTV Unplugged and MTV Spoken Word. Being the first to give a stage to the indie music revolution brewing within the country, MTV also launched a platform MTV Indies, to showcase the best in Indie music that India had to offer. It is thus, not surprising, that the trend setter in the world of music in the country, MTV India, is the first brand to curate playlists for Apple Music.

Speaking about this association, Aditya Swamy, Business Head, MTV India said, “It is an absolute pleasure to be give Apple Music members a chance to experience MTV’s taste in music. Programming both popular and indie music on a daily basis for our TV and digital assets and producing several original music shows over the years, we are excited to give Apple Music a wide range of handcrafted playlists which will influence and reflect the wide range of music young India tunes into.”

The exclusive playlists that are being curated by MTV India for Apple Music includes an Indie Top 10 series ranging from ballads to collaborations to electronica to Heavy Metal. Along with this, music lovers will also be able to access a mix of playlists about MTV’s bespoke properties such as Coke Studio@MTV and the best pick of Bollywood music with specially curated thematic lists.

About MTV
MTV, world’s premier youth brand, is a dynamic and a vibrant blend of music and pop culture. With a global reach of more than half-billion households, MTV is a cultural home to the millennial generation, music fans and artists. 32 MM fans following MTV across show pages on social media have made the brand #1 in social influence as well. MTV products are available across 35 unique categories with targeted brand licensing. MTV also has a buzzing MTV Live business with properties like MTV Video Music Awards and MTV Bollyland. Aiming to entertain, lead and collaborate with young people through its evocative communication and youth relevant shows like Roadies, Coke Studio@MTV, MTV Unplugged, MTV Rock the Vote, MTV Kaisi Yeh Yaarian etc. For information about MTV in India, visit www.mtv.in.com.