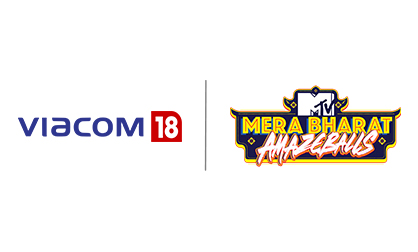 The study draws insights from over 25,000 + youngsters across 400+ towns, continuing to dish out the latest youth trends for over a decade

National, 27th January, 2020: With 600 MN people below the age of 25, no other nation in the world is home to a more staggering young population than India. From the nostalgic Gen-Y to the empowered millennials and the high-on-hashtag Gen-Z, India today comprises of a generation that’s driven by intent, committed to action and invested towards a world of abundant opportunities. As India’s no.1 youth brand, MTV understands this shift in paradigm and demonstrates it once again with MTV Insights Studio’s 2020 edition of the country’s longest running Youth Insights Study. Titled MTV Mera Bharat Amazeballs, the study focuses on the changing mindsets of Indian youth who are resolute to make India great again.

Speaking about the need of an in-depth study on youth behaviour, Ferzad Palia, Head – Voot Select, Youth, Music & English Entertainment Viacom18 said, “For over 2 decades, MTV has led the way in understanding the pulse of its young audience and has been a pop culture icon. Deep consumer insights and continuous engagement with our audience is at the heart of how we‘ve managed to lead trends over decades. We’re proud to share our learnings with the world.”

The MTV Youth Insights Study reflects unique choices and preferences that define young India. Going by its title, the study explores the multi-dimensional and conscientious facets of the youth – highlighting their belief in a new India, that is replete with opportunities and progress and in alignment with their world view. Going local and thinking global is now the emergent code of new-age cool. From 78% of young people putting more onus on family over career to 83% preferring to work in their hometowns, the case study covers insights from 25,000 + youngsters across 400+ cities between the age of 15 – 25 years. The five key themes of the study are – ‘Make India Great Again’, ‘Bharat = India’, ‘Girl on Top’, ‘Thank God Its Family’ and ‘I am Who I am’.

Commenting on the change in youth’s mindsets, Navin Shenoy, Head of Marketing -Youth, Music and English Entertainment, Viacom18 said “Mera Bharat Amazeballs is an inward look into the changing demographic of young India and brings to light what makes them tick and what ticks them off. Despite being a generation high on social media, the youth today is passionate, positive and action oriented committed to create a society, where everyone matters. These insights are relevant to the entire ecosystem that caters to the ever-evolving consumption cycle of youth.”

Quick snapshot of the report and its impact on industries

Make India Great Again
Highlighting their values, goals, ambitions and anxieties, the report further encapsulates how ‘armchair’ activism is no longer in the Indian youth glossary. Over the last few years, a whopping 81% of millennials have actively participated in local activities like beach clean-ups, tree plantation drives, car pools and even government driven initiatives like Swachh Bharat Abhiyaan. In view of the cases in Unnao and Kathua, 79% of youth feel that safety of women is still not given enough importance in the country.

Girl on Top
As per the Mera Bharat Amazeballs study, 94% of women believe that boys and girls should adhere to the same rules in a relationship against a number of 64% on the same parameter in 2016. 53% of women have advocated for their parents being modern in their attitude as against 36% of men. Moving beyond the realms of homemaking, women today are decision makers with 84% admitting that their opinions are valued in the family.

Thank God Its Family
Arranged marriage is becoming more acceptable with 60% of young India preferring it as they believe that their parents know them and hence also understand what’s good for them. Also, 81% say they’ll be happy to stay with their parents or in-laws post marriage. Arranged marriages, joint families, choosing family over career are increasingly gaining ground amongst youth today with family being a driving force in defining their choices.

I am Who I am
MTV Mera Bharat Amazeballs found that acceptance has also surfaced around gender definition with 71% of youngsters extending support for homosexuality. 75% of the youth today want to do something meaningful with their lives while 83% believe that pursuing passion is more important than money.

In this edition, MTV deployed three parameters to understand the new emerging face of young India. Starting with self-perspective which included talking to masses, the study proceeded to content perspective which assessed the youth through the lens of content they consume. Last came the ring side perspective comprising anecdotes from people who have seen youth evolve over the years – parents, teachers, HR professionals, psychiatrists etc. Qualitative partners for the research are Third Eye Qualitative Researchers and Quantitative Research Partner, Juxt Smart Mandate.

For further details and enquiries, write to: insights@mtvindia.com

About MTV
MTV, the world’s premier youth brand, is a dynamic and vibrant blend of music and pop culture. With a global reach of more than half-billion households, MTV is a cultural home to the millennial generation, music fans, and artists.  50 MN fans following MTV across show pages on social media have made it one of the top brands in social influence as well. MTV consumer products are available across 35+ unique categories through strategic brand licensing tie-ups, leading to combined retail sales of 100+ crores present across all key online and off-line channels of distribution. MTV has a buzzing MTV Live business with properties like MTV Video Music Awards and MTV Bollyland. Aiming to entertain, lead and collaborate with young people through its evocative communication and youth relevant shows like Hustle, Roadies, Splitsvilla, Coke Studio@MTV, MTV Unplugged, MTV Girls on Top, MTV Love School and keep them engaged through various cause led initiatives such as MTV Rock the Vote and MTV The Junkyard Project. For information about MTV in India, visit www.mtv.in.com

About Viacom18
Viacom18 Media Pvt. Ltd. is one of India’s fastest-growing entertainment networks and a house of iconic brands that offers multi-platform, multi-generational and multicultural brand experiences. A joint venture of TV18, which owns 51%, and Viacom Inc., with a 49% stake, Viacom18 defines entertainment in India by touching the lives of people through its properties on-air, online, on-ground, in-shop and through cinema.