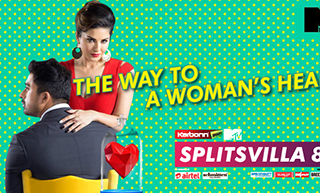 NATIONAL, June 30th 2015: The way to a woman’s heart is paved with a million faux pas! To save boys from making the same mistakes over and over again in their quest to understand ‘what women love’, MTV, the iconic youth brand, has launched the eighth season of their massively successful non-fiction show and guide to finding romance – Karbonn Smart MTV Splitsvilla. This season, taking the lead on teaching the boys the way to translate a woman’s feelings, are none other than sultry temptress Sunny Leone and dashing ‘Roadie’ MTV VJ Rannvijay, who will be seen hosting the show together. So gear up as the love lessons are about to begin as Karbonn Smart MTV Splitsvilla 8 goes on air this Saturday, 4th July 2014 at 7 PM, only on MTV.

This season, the odds are tipped in the favour of the girls as the boys will be seen doing all the ‘mehnat’ to find a way into their lady love’s heart! To make the incline to success more slippery, the devious creators of the show in association with the mischievous Sunny Leone and the devilish Rannvijay, decided to ‘Kill Boring’ by having some more fun at the boys’ expense by changing the format of the show. To show the boys what women truly value in a man, this time, the creators of the show are pitting 8 celebrity boys against 8 regular boys to woo 14 girls! Set against the gorgeous backdrop of pristine beaches of Goa, the show will be an interesting insight into a woman’s heart and the secrets it holds. Will the girls opt for the glitz and glamour surrounding the hot celebrities or will the boys next door with their worldly knowledge and charm win the ladies over? To keep the nail-biting excitement going, the show will air on both Saturday and Sunday at 7 PM for the first two weeks, thereafter it will be showcased on each Saturday at 7 PM.

Announcing the launch of the show’s latest edition, Aditya Swamy – EVP & Business Head, MTV said, “We are in the 8th season of Splitsvilla and the temperature is soaring at an all-time high. The all new combination of Sunny and Rannvijay has given the show a whole new flavour as we explore the theme of ‘What Women Want’. We have a record number of brand partners this year which reflects the growing popularity of the show. Leveraging our huge fan base on Social Media with exclusive digital content and combining it with a multimedia marketing campaign, I am looking forward to a record opening for this season as we give our audience double the action by launching the show for the first time as bi weekly.”

Commenting as the host of the show consecutively for the second time, Sunny Leone said, “Karbonn Smart MTV Splitsvilla is always so much fun! And this time is going to be crazier than ever. I am thoroughly excited to be back on the show and I’m intrigued to find out what the boys will come up with too woo the women they like. I’m sure it’s going to be fun, I know I’ve had a lot of fun shooting with all these wonderful contestants and Rannvijay, who’s just a big ball of energy! Make sure you don’t miss the show, it’s going to be way cooler than last season!”

Coming back as the host of Karbonn Smart MTV Splitsvilla after seven years, Rannvijay said, “What do women really love? I think they themselves don’t know what they want! Really, take it from a guy who got married recently, I’m still trying to figure it out! But trust me when I say this, it’s going to be a lot of fun watching all these guys bumbling through their search for the answer to the eternal question, what do women really love? Make sure you join Sunny and me as we try and make this journey easier (or maybe a little more difficult) for them!”

This totally spiced season aptly themed on ‘What Women Love’, will have the boys going to any and every extent to make the woman of their choice happy. From pampering, to cooking, to cleaning and of course to loving the girls, they will have to win their hearts any way possible. We have with us this season, 8 sizzling hot girls along with 8 celebrity boys: Paras Chabra, ex-winner of Splitsvilla 5; Zaan Khan, a parallel lead in a famous daily show; Prince Narula, the winner of MTV Roadies X2; Utkarsh Gupta, the baby faced softie from MTV’s much loved fiction show MTV Kaisi Yeh Yaariaan; Ishaan Chibber – model and radio show host; model Viren Singh Rathore and TV actors Amaad Mintoo and Yash Pandit. Another set of 8 male contestants will also compete against the 8 celebrity boys to win the hearts of the beautiful girls. Shot on the sultry beaches of Goa, this season unites lovers on the white sands where they will be seen competing against one another to win the title of the ultimate King and Queen of Karbonn Smart MTV Splitsvilla 8.

Catch Karbonn Smart MTV Splitsvilla 8 “What Women Love”, where love is all set to cross extreme boundaries, premiering on 4th July 2015 at 7 PM only on MTV!

About MTV
MTV, world’s premier youth brand, is a dynamic and a vibrant blend of music and pop culture. With a global reach of more than half-billion households, MTV is a cultural home to the millennial generation, music fans and artists. A 30 MM fan following across show pages on social media has made MTV the #1 brand in social influence as well. MTV products are available across 35 unique categories with targeted brand licensing. MTV also has a buzzing MTV Live business with properties like MTV Video Music Awards and MTV Bollyland. Aiming to entertain, lead and collaborate with young people through its evocative communication and youth relevant shows like MTV Roadies, MTV Coke Studio, MTV Unplugged, MTV Rock the Vote, MTV Kaisi Yeh Yaarian etc. For information about MTV in India, visit www.mtv.in.com.