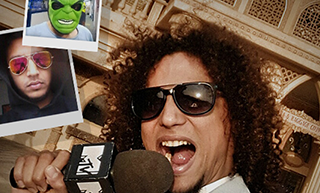 NATIONAL, March 23, 2015: Hair? Check! Pout? Check? Angle? Check! If you know what this checklist is all about, you’re addicted to taking selfies! And now, MTV, the iconic youth brand, gives all you selfie enthusiasts a chance to whip out your phones and strike a pose with the ‘MTV The Great Selfie Challenge’. An innovative and super exciting digital show to kill boring and legitimize your unhealthy obsession with taking selfies, ‘MTV The Great Selfie Challenge’, is a unique show where five selfie enthusiasts will get the opportunity to travel across India completing challenges in the quest for the most epic selfie ever!

Selfies go back to the mid 1800’s where Robert Cornelius took the first ever ‘Selfie’ only he didn’t know it was called that. Since being coined in 2002, the word ‘selfie’ and selfies themselves gained popularity in 2010 and by 2013 it was declared the ‘Word of the Year’. As people around the world are going crazy taking selfies in every pose and situation possible, MTV, the brand at the forefront of every pop culture movement is all set to pay tribute to the biggest phenomenon of our times with ‘MTV The Great Selfie Challenge’.

Explaining the phenomenon further, Ekalavya Bhattacharya, Digital Head at MTV India says, “The selfie was supposed to be like every other fad that came and went; but that hasn’t happened and I personally don’t think it is something which will die any time soon. While several brands have tried to create a quirky campaign around selfies, none of them have been particularly striking. They have almost always exclusively been contests asking users to send in their photos. How boring! What’s different about this show is that – It isn’t just about an epic selfie but also the incredible, crazy and adventurous story that’s behind every great click.”

MTV is looking for selfie buffs who are willing to travel thousands of kilometers, go to logic defying lengths, doing some of the craziest stuff imaginable – from cliff diving to going underwater to hanging out with ghosts – all in the bid to get that perfect selfie. All one needs to do in order to be on this show is to complete three selfie challenges that have been laid out on www.mtvindia.com/selfie. The five best entries will be selected to experience the most thrilling and adventurous selfie dares which forever will leave their mark in selfie history! So what are you waiting for? Get ready to feel the adrenaline rush as you take up the epic challenges to be honored the King/Queen of Selfies.

So, whip out your cell phone, strike a pose and show us your “selfie” for a chance to experience the most daring challenges!

MTV, world’s premier youth brand, is a dynamic and a vibrant blend of music and pop culture. With a global reach of more than half-billion households, MTV is a cultural home to the millennial generation, music fans and artists. A 30 MM fan following across show pages on social media has made MTV the #1 brand in social influence as well. MTV products are available across 35 unique categories with targeted brand licensing. MTV also has a buzzing MTV Live business with properties like MTV Video Music Awards and MTV Bollyland. Aiming to entertain, lead and collaborate with young people through its evocative communication and youth relevant shows like MTV Roadies, MTV Coke Studio, MTV Unplugged, MTV Rock the Vote, MTV Kaisi Yeh Yaarian etc. For information about MTV in India, visit www.mtv.in.com.