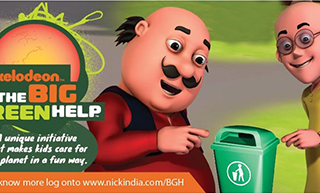 A unique initiative that makes kids care for the planet

National, 18th March, 2015: Kids inspire, influence and hold the baton to the future of society. It is this kid power that Nickelodeon, India’s leading children’s entertainment franchise, has sought to unleash with the Big Green Help 2015. Answering the nation’s clarion call for Swach Bharat and taking it a step further, the pioneering pro-socio environment initiative will empower and encourage kids to save the planet and its resources.

The Big Green Help will provide information and tools to kids to understand the various environmental issues like conserving energy, preserving nature and fighting pollution hazards, amongst many others. Nick will make this serious topic very relevant and kid friendly with the adorable Nicktoons spreading the key message of saving the planet.

Commenting on the initiative, Nina Elavia Jaipuria, EVP & Business Head, Kids Cluster said, “Nickelodeon continuously engages with kids on issues that affect their lives and encourages them to take action. With The Big Green Help, we aim to provide them with the necessary knowledge so they can become part of the environmental solution and ensure a brighter future for themselves.”

Post the roaring success in the last couple of years, the Big Green Help initiative by Nickelodeon has now made its way into the digital space through an exclusive microsite (nickindia.com/BGH). The microsite will allow kids can to learn more about the environmental issues and proudly be the “Agents of Change” to make the world a healthier place The on air campaign further resonates this message and showcases kids taking the higher ground and encouraging adults to walk the right path.

Nickelodeon has also launched a new chapter in their environmentally friendly challenge by opening up an online game – The Big Green Game with a goal of kindling real-world action for environmental change. The very popular Motu Patlu Nicktoons will be featured wherein they will be on a mission to clean Furfuri Nagar and make it garbage free. The new online kid’s game seeks to use social media as a tool to help educate today’s children about global environmental concerns.

Launched with the goal of spurring a kid-led movement, Nickelodeon also encourages kids to pledge to be green “ Refuse, Reduce , Reuse , Recycle , and take actionable stops in the real world through projects in their communities and schools.

Nickelodeon, one of India’s leading kids’ entertainment brand and part of the Viacom18 Media Pvt. Ltd, is available in over 100 million households in the country. The Nickelodeon cluster in India boasts of a bouquet of differentiated channels that cater to kids from tots to teens – Nick, Sonic and Nickelodeon (with 2 programming blocks i.e. Nick Jr./ Teen Nick). Nick Jr. (www.nickjrindia.com), which is ‘the smart place to play” believes that ‘education’ and ‘entertainment’ go hand-in-hand and is aimed at young parents and pre-schoolers. Internationally acclaimed shows like Dora the Explorer, Bubble Guppies, Wonder Pets, Team Umizoomi and Go Diego Go foster motor, memory, maths and language development in a child. The Nickelodeon channel also caters to teenagers in the latter half of the day with the Teen Nick block which showcases international sitcoms such as ICarly, Victorious and Drake and Josh. The Nickelodeon cluster has an ecosystem that extends beyond television into Consumer Products, on-ground and digital platforms.