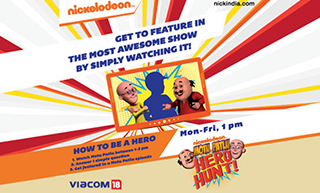 National, 5th May 2015: Summer is back and so are the holidays! Celebrating this time of fun and frolic in style, Nickelodeon, India’s leading kids’ entertainment franchise, is all set to entertain kids across the country with exciting offerings across NICK, SONIC, Nick Jr. and Teen Nick. Building on its unparalleled leadership story, Nickelodeon today announced its high decibel plans for the summer season, rolling out a robust programming line-up and interactive campaigns on-air, on-ground and online. From power-packed promotions to exciting new shows, new seasons of leading shows and many more interactive initiatives, Nickelodeon aims to engage kids across age groups this summer.

The undisputed leader of the kids genre, NICK continues to build the kids entertainment category with path-breaking innovations. In a power-packed start to the summer season, NICK has set the stage for its flagship show Motu Patlu, launching a campaign called ‘Motu Patlu Hero Hunt’. Through this unique initiative, Nicksters have the opportunity to get animated and star in the Motu Patlu show on television.

To give wings to the campaign NICK will have a huge 360 degree roll out across the country including cross channel television plan, print, ambient, digital and a whole host of experiential touch points to engage with kids wherever they are. Nickelodeon’s ‘Motu Patlu Hero Hunt’ will see tons of games and fun activities for kids in malls in Mumbai and Delhi. In a first-of-its-kind innovation kids will get an opportunity to interact with the animated Motu and Patlu on a live screen at malls. The kids will adorn an animated avatar and have conversation with their favourite toons Motu and Patlu using augmented reality. Nickelodeon’s campaign will also be seen at Pantaloons across 26 outlets and numerous McDonald outlets pan India. Motu Patlu will also have its very own microsite on nickindia.com which will host a wide range on engaging initiatives like games, videos, contests, Memes of the day and more.

Adding to the summer excitement will be the launch of Motu Patlu’s 6th exclusive ‘made-for-television’ movie, Motu Patlu Kungfu King Returns to be released in June. The channel will also launch all new episodes of the show this season. This will be preceded by the launch of the latest SpongeBob adventure: The SpongeBob Movie – Sponge Out of Water all set to release across India on 8th May 2015.

Speaking on the success and way forward for the Nickelodeon franchise, Nina Elavia Jaipuria, EVP & Business Head Kids Cluster, Viacom18 said “Nickelodeon has always represented kids and their aspirations. We have continuously catered to their dynamic preferences by giving them what they want on a platform of their choice. This summer we have once again set out to realize their dreams through engaging campaigns like animating a kid in a Motu Patlu episode and Sonic’s Selfie campaign, thus creating new benchmarks of innovation and redefine engagement in the kids genre. Through these campaigns we are sure that kids will continue to make our endearing Nicktoons a major part of their daily lives.”

Sonic that delivers action and adventure with a dash of comedy, has established itself as one of the fastest growing channel in the kids’ genre. As part of the summer plans for SONIC, the Nickelodeon franchise has launched a campaign to drive engagement with the digital savvy generation, called ‘Selfie Kheecho Prizes Jeeto’. Starting Mid May, the campaign will have kids nationwide clicking selfies with a freeze frame of their favourite toons from Pakdam Pakdai to win exciting gadgets every day across platforms like Whatsapp, Facebook.com/sonicgang and sonicgang.com.

Sonic’s campaign will also reach out to kids through the length and width of the country through a robust media mix which will include promotions on TV, print and radio. Sonic will also go BTL with an extensive van activation that will reach out to over 15 smaller towns across Maharashtra, UP and MP. Kids will be able to take selfies at the vans and win prizes with Pakdam Pakdai. Sonic will be targeting the high footfalls at malls where Kids will also be able to engage with Sonic’s Doggy Don from Pakdam Pakdai by taking selfies with the characters which can help them with instant gratifications like tabs, watches and other Sonic Merchandise. Sonic will also connect with kids across multiple retail touch-points such as Funcity across 12 cities and numerous Mcdonalds outlets pan India. Sonic Selfie Khicho, Prizes Jeeto contest will be hosted on sonicgang.com.

Further building on the Pakdam Pakdai franchise, the channel will be launching all new episodes of the action packed chase-comedy show this summer. SONIC has also launched 2 new shows – Hubert Takako and Mini Ninjas.

Nickelodeon continues to innovate, engage, challenge and inspire with its endearing array of characters. Constantly challenging the norms with path-breaking engagement ideas that connect with our little viewers, the channels continues to bring alive “A SUMMER OF ENGAGEMENT”

Nickelodeon, one of India’s leading kids’ entertainment brand and part of the Viacom18 Media Pvt. Ltd, is available in over 100 million households in the country. The Nickelodeon cluster in India boasts of a bouquet of differentiated channels that cater to kids from tots to teens – Nick, Sonic and Nickelodeon (with 2 programming blocks i.e. Nick Jr./ Teen Nick). Nick Jr. (www.nickjrindia.com), which is ‘the smart place to play” believes that ‘education’ and ‘entertainment’ go hand-in-hand and is aimed at young parents and pre-schoolers. Internationally acclaimed shows like Dora the Explorer, Bubble Guppies, Wonder Pets, Team Umizoomi and Go Diego Go foster motor, memory, maths and language development in a child. The Nickelodeon channel also caters to teenagers in the latter half of the day with the Teen Nick block which showcases international sitcoms such as ICarly, Victorious and Drake and Josh. The Nickelodeon cluster has an ecosystem that extends beyond television into Consumer Products, on-ground and digital platforms.