Media
On its 10th anniversary, Viacom18 promises to open new worlds for every Indian and beyond 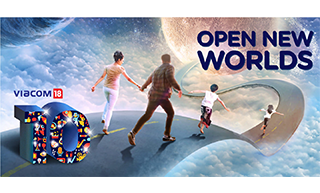 National, 16th November 2017: Viacom18 Media Pvt. Ltd., India’s youngest media and entertainment network and the house of iconic brands, completed its 10th anniversary on 6th November 2017. The full-play media organization has charted a 40X growth in topline over the last decade, emerging as India’s fastest growing full-play company in the Indian M&E industry. To mark the momentous occasion, Viacom18 unveiled its corporate brand film, suitably titled ‘Open New Worlds’. On the occasion of their 10th anniversary, Viacom18 also announced two major developments – COLORS Tamil will be launched in February 2018 while VOOT’s subscription-based premium offering will be launched by mid-2018. In keeping with its focus on regional entertainment, the network plans to offer digital original regional content on its VoD platform VOOT and dial up its thrust on regional movies as well. The network is also aggressively dialing up its play in the kids ecosystem, where from just television content, it has now taken its homegrown characters to the silver screen, to millions of digital screens via VOOT Kids, merchandizing and even to live experiences. Viacom18 also announced its latest social change campaign, in partnership with The Nudge Project, to provide livelihood training and job placements to underprivileged youth, through residential programmes. Viacom18 has also started a crowdfunding initiative through Milaap.org so that likeminded citizens can contribute to this cause.

“In my mind, we are a 10 year ‘young’ future-focused organization that continuously challenges status quo. Unlike legacy players we have often entered new areas much later and yet carved out a distinctive identity for ourselves. We are proud of our ability to nurture and manage a multi-brand, multi-platform and multilingual network while growing at a blistering pace and fostering a winning culture based on a shared set of values. 10 years ago it would have been hard to imagine that a 3 channel, ~INR80cr network would mushroom into a profitable full-play ~INR3100cr media powerhouse that has spread its wings across 80 countries. That said, our journey has only just begun. Kudos to our team for creating magic time and again for our fans and audiences.” Sudhanshu Vats, Group CEO, Viacom18 explained.  Elaborating on the brand promise #OpenNewWorlds, he further said, “Our vision to be India’s most admired M&E company is reflected in our intent to open new worlds for our audiences. Whether through our shows such as Balika Vadhu, Shakti, Lakshmi Baramma, Angels of Rock, VOOT Original Untag or movies like Bhaag Milkha Bhaag, Queen, Toilet Ek Prem Katha and more; a strong undercurrent of social messaging drives a lot of our content.”

Open New Worlds is a progressive philosophy that articulates the reason the brand exists in the lives of people, brought alive through Viacom18’s decade long engagement with over 500 mn+ Indians. The brand film, conceptualized by Leo Burnett Orchard and produced by Offroad Films, explores how Viacom18 has been encouraging everyday Indians to explore possibilities, push their own boundaries, embrace opportunities and challenge norms. The narrative of the film is carried forward through a melodious title track sung by celebrated singer Jubin Nautiyal.

A decade ago, Viacom18 was formed as an equal joint venture between global entertainment giant Viacom Inc. and Indian media powerhouse Network18, with 3 channels – Nick, MTV and Vh1. The network launched its marquee General Entertainment Channel COLORS in 2008 that raced to occupy the number 1 rank within 9 months of launch. A decade on, Viacom18 holds leadership positions in almost every genre of the broadcast business that it operates in. Over the course of the decade, the company has further diversified into 4 more lines of business, across films, digital, experiential and merchandize, creating an entertainment ecosystem that reaches out to audiences across demographics and geographies.

Today, the broadcast business alone has 44 channels across 80 countries. COLORS has transcended languages and now become a much larger franchise with COLORS Kannada, COLORS Super, COLORS Bangla, COLORS Marathi, COLORS Gujarati, COLORS Odia and the upcoming COLORS Tamil. MTV’s portfolio has grown with the launch of a 24×7 music offering in the form of MTV Beats and a premium offering MTV HD+. Nick, the network’s flagship kids entertainment brand is a clear leader, supported by Sonic, Nick Jr. and Nick HD+. The English entertainment cluster has sharply segmented offerings with Comedy Central, Vh1 and COLORS Infinity competing to occupy pole positions in this genre. The network’s movie studio, Viacom18 Motion Pictures, has been at the forefront of producing content driven cinema, bringing in both commercial and critical success. The digital business VOOT, all of 18 months old is already the third ranked video streaming service in the country with close to 30 mn monthly active users and is being recognized globally as an innovator in the space –on both technology and content fronts.

The Live and Consumer Products businesses are also increasing their footprint, and helping build an experiential association with our fans and audiences, be it through launching the world’s first ever MTV themed café FLYP@MTV or the collaboration with KidZania to create experiences for kids and their parents. Keeping in line with its ethos of being a force multiplier within Indian industry, Viacom18 recently launched VStep – a startup engagement programme aimed at mentoring and providing test environments for startups working in the entertainment and media-tech spaces.

With its strong focus on creating magic for its fans and crafting a shared, winning organizational culture, Viacom18 is primed to build on an exhilarating first decade to open new worlds for all in the years to come.

Viacom18 Media Pvt. Ltd. is one of India’s fastest growing entertainment networks and a house of iconic brands that offers multi-platform, multi-generational and multicultural brand experiences. A joint venture of Viacom Inc. and the Network18 Group, Viacom18 defines entertainment in India by touching the lives of people through its properties on air, online, on ground, in shop and through cinema.