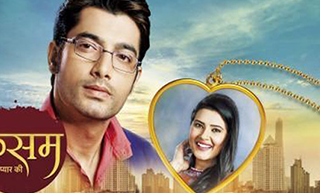 Mumbai, March 1st, 2016:  Love is the purest of all bonds – one which transcends all boundaries; one which has no limits or restrictions. Many even believe that death is not the end of love – in its truest form, love continues…in another life, in another form. But what if love continues in the same life? Is that the ultimate form of love – the everlasting kind? Celebrating eternal love going beyond lifetimes while bringing fate to its knees, COLORS presents Kasam…Tere Pyaar Ki. A tale of star-crossed lovers Rishi (Ssharad Malhotra) and Tanushree (Kratika Sengar), highlights the connection between their souls since childhood; but the vagaries of destiny pulls them apart. With the focus on lovers who pine for one another even after fate rips them apart, Kasam…Tere Pyaar Ki, produced by Balaji Telefilms, will take viewers on a whirlwind journey into the altruistic love story of Rishi and Tanushree starting 7th March, 2016 and air every Monday to Friday at 10:00 PM on COLORS.

Commenting on the launch of the show, Manisha Sharma, Programming Head – COLORS said, “Love has universal appeal; it needs no language to reach out to the hearts of viewers across age groups and geographies. COLORS has always had a penchant for love and romance, and with Kasam…Tere Pyaar Ki, we are showcasing the epic narration of love between Rishi and Tanushree over lifetimes. The show further marks the strengthening of our relationship with Balaji Telefilms, with whom we have delivered path-breaking content time and again. Their proficiency at depicting the various shades of love has made them master story-tellers with a strong hold on the pulse of the audience’s hearts”.

Set against the Punjabi milieu in present-day Mumbai, Kasam…Tere Pyaar Ki recounts the journey of an impudent 20-year-old Rishi who falls head over heels in love with a simple Tanushree but hardens in the face of loss and separation over time. The show traces Rishi’s journey as he fights fate and destiny to keep the love of his life, a humble and optimistic Tanushree, by his side. Rishi and Tanushree’s meeting is legendary – it is written by the heavens; their relationship planned by their souls long before their eyes made contact. However, a brutal turn of events brings fatality to their lives even before their dreams of being together could be realized.

Speaking about the show further, producer Ekta Kapoor of Balaji Telefilms said, “Kasam…Tere Pyaar Ki redefines every known shade of love. It explores a deep-rooted connection between souls, binding Rishi and Tanushree’s hearts from childhood and continuing, across lifetimes, long after destiny separates them. The show instills freshness through its intensity of emotions, which combined with a distinctive backdrop, will find appeal amongst romantics and convert non-believers. The show’s scale and production quality further adds to the authenticity of the concept thereby creating a belief system around the perpetuity of love”.

Commenting on portraying Rishi’s multi-dimensional character, Ssharad Malhotra said, “I have always believed in love; it is all-encompassing with the power to infuse strength into every individual. Kasam…Tere Pyaar Ki achieves just that for my character, Rishi. It’s a multi layered role which is a dream for any character.”

Adding further, Kratika Sengar, essaying the role of Tanushree, said, “Kasam…Tere Pyaar Ki is all about the power of love; its ability to shine through in the toughest situations and extending into eternity. For us, the show has been a journey of passion as we delve into our hearts to showcase the powerful sentiments felt by Rishi and Tanushree. I hope that the viewers feel the love that we’re trying to portray on screen and support us wholeheartedly”.

Kasam…Tere Pyaar Ki features a stellar line-up of character artists who will be joining Ssharad Malhotra and Kratika Sengar narrate this tale of love across lifetimes. The Punjabi milieu of the show, further, sets the tone of the story with its vibrant colours and vivacious people. These include actors like Vijay Kashyap as Raj Singh Bedi (Rishi’s father), Vibbha Chibber as Rano Bedi (Rishi’s mother), Vishnu Sharma as Virender Khurana (Tanushree’s father), Jyoti Gabba as Sharda Khurana (Tanushree’s mother) and many more.

COLORS has devised 360-degree integrated marketing campaign for the show including mediums like print, broadcast, OOH, and radio among others. Kasam…Tere Pyaar Ki will also be promoted via a robust digital strategy engaging viewers across social media platforms like Facebook, Twitter and Instagram.

Will Rishi and Tanushree’s love defy fate?
Will their never-ending love keep them together for eternity?
Watch Kasam…Tere Pyaar Ki to find out…
Starting March 7th, 2016, Monday to Friday at 10:00 pm only on COLORS