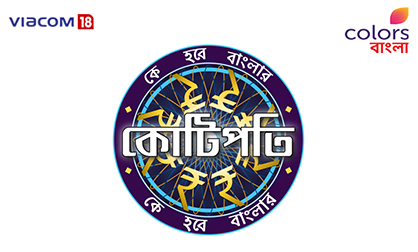 Monday 28th May, Kolkata: Knowledge is power – you’ve probably heard this before. But what if knowledge could actually give you some real power, in the form of whopping 1crore? Well, it’s time you flex your brain power and get those grey cells pumped up because the right kind of knowledge could just transform your life by helping you win a jackpot! To make your weekday prime time thrilling, entertaining and knowledgeable. COLORS Bangla brings to you “Ke Hobe Bangla r Kotipoti” – the iconic quiz gameshow regionalized in Bangla. Produced by BIG Synergy Media Limited, this knowledge quiz show promises to fuel aspirations and change the life of an ordinary person taking the hot seat, whose only armament is his wealth of knowledge. The hugely successful game show popular around the globe as ‘Who Wants to be a Millionaire’ and best known in India as ‘Kaun Banega Crorepati’ in its current rendition in Bangla will premiere on 16th July 2018, every Monday to Friday at 9.00 pm only on COLORS Bangla

Taking the reigns as the Host will be the very charming and Bengali Cinema’s stalwart, Prosenjit Chatterjee. The National award–winning actor has a huge fan base and is loved by viewers across age groups for his superlative acting skills and humble disposition. Arguably the most successful game show worldwide, ‘Ke Hobe Bangla r Kotipoti’ will give a chance to the Bengali speaking audiences residing in Bengal to showcase their awareness, intelligence and judgement. Auditions have been conducted in various cities like Kolkata, Malda, Siliguri, Kharagpur, Durgapur, Howrah.

After successfully adapting the show previously in Marathi, said Ravish Kumar, Head – Regional Entertainment Viacom18, “The regional entertainment market is extremely dynamic in nature and the viewer appetite for quality content is fast increasing. KBC Bangla, with its superior production value will be a visual treat while the very format allows everyday Bengalis to turn extraordinary by harnessing their aptitude. In Prosenjit we have the quintessential Bengali host with the right mix of intellectual appeal and grandeur. I am confident of KBC working both as a show and dialing up COLORS Bangla’s share in the discerning Bengali market.”

peaking about the launch and impact Rahul Chakravarti, Business Head – COLORS Bangla & Odia said, “We are upping the ante on our content line-up this year and a marquee show like KBC is a step in that direction. The show has been a massive hit worldwide and has been widely appreciated for its edutainment content. Bengalis are known for their wealth of knowledge and now is the time for them to showcase their talent to the world. Every question counts and contestants will have to apply strategy and carefully progress while weighing the risks they’re willing to take. We welcome Prosenjit onboard as the Host and Presenter of the very first season of the show on Colors Bangla. Prosenjit is a phenomenon across Bengal and I’m sure his enthusiasm will make all Bengali viewers believe in the opportunity to transform their life through this remarkable show.”

Taking the mantle of a Host superstar, Prosenjit Chatterjee said, “KBC is a reckoned format that has taken India by storm and I have always considered this show as an inspiring platform that drives individuals to relentlessly follow their dreams. This show will give them an opportunity to showcase their intellect while winning sizeable amount of money. As the host and their advisor, I’m looking forward to help viewers play this iconic game and hopefully witness a few Crorepatis during the course of the show.”

Siddhartha Basu, Creative Producer, BIG Synergy Media Limited further added, “Bengal is fertile ground for a knowledge show with huge human-interest values, and the knowledgeable Bengali, a platform like Colors Bangla and an empathetic star host like Prasenjit make for a great fit for the show. It’s not only a life-changing opportunity for contestants, but also makes for great engagement and interactivity for viewers, as we’ve found in numerous language versions that Big Synergy has produced in different parts of the country. I’m excited about the prospects of the show, and hope that from July 16, wherever they follow Bangla, 9 pm will draw in families before their TV screens to see Ke Hobe Banglar Kotipoti”.

Catch all the frenzy on VOOT!!

So, get ready to test your intellect and make a mark on “Ke Hobe Bangla r Kotipoti”

Starting July 16th every Monday to Friday at 9.00 PM, only on COLORS Bangla!

About COLORS Bangla
A family entertainment channel that brought about a revolution in Bangla Television, COLORS Bangla (Erstwhile ETV Bangla) matches the distinctiveness of the rich Bangla culture with qualitative and contemporary programming.  The channel mirrors the cultural ethos and the progressive values of the Bengalis’ through innovative and relevant content. Some of our flagship shows have been programmes like Resham Jhanpi, Mahaprabhu Sree Chaitanya, E Amar Gurudakshina, Bindass Dance, Abbulish, Byomkesh, Shonge Srijit, Benebou, amongst others.