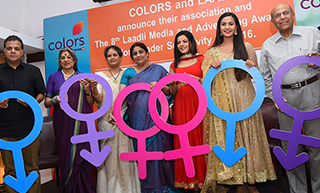 Mumbai, 9th November 2016: Population First, the communication and advocacy initiative working towards gender sensitivity, today launched the 8th edition of the Laadli Media and Advertising Awards for Gender Sensitivity (LMAAGS) 2015-16 in partnership with COLORS. These awards recognize and celebrate the efforts of the media and advertising community to promote gender sensitivity in India. The MoU signed with COLORS as the exclusive Cause Partners is in keeping with the channel’s vision to highlight a woman’s strength and gumption in the society-at-large. The last date for receiving entries is 15th December 2016, and the awards will be announced soon thereafter.

Speaking at the launch Mr. Raj Nayak, CEO – Hindi Mass Entertainment, Viacom 18 said, “Gender equality and empowerment are tangible issues faced by the Indian population today. As we steadily move towards adopting Western cultural themes, there is a section of the media and advertising industry that is working diligently towards rehabilitation of various strata in our society. At COLORS, it is our constant endeavour to highlight the various characteristics and traits of the strong Indian woman of today, and our association with the Laadli Media Awards is a step in this direction.”

Talking about the power of media, Mr. S. V. Sista, Executive Trustee, Population First says, “Over the last few years LMAAGS has set a benchmark for the media in the space of gender sensitive reporting of women. We thank the media for their continuous support in this issue. The LMAAGS was instituted to salute this spirit in the space of gender sensitivity, thus celebrating the power of media”.

According to Dr. A. L. Sharada, Director, Population First, “From a mere 100 entries in 2007 to more than 1500 entries in 2015, Laadli Media Awards have come a long way in acknowledging the media’s contribution in women empowerment and gender issues. The increasing volume of discussion in public domain on gender issues is an indication that we are witnessing the beginnings of change. This year, too, we hope to see a quantum leap in the number of entries of Laadli Media Awards. Also the partnership with COLORS is a refreshing start to the new edition and indeed helps us to sustain the impact and reach of the awards.”

The Laadli Media and Advertising Awards for Gender Sensitivity have been instituted to acknowledge, highlight and celebrate the commendable efforts undertaken by Print and Electronic media (TV, Radio and Web) and Advertising Agencies, to promote gender sensitivity as an integral part of their work.

Criteria for Eligibility:
An entry to the Laadli Media and Advertising Awards for Gender Sensitivity should emphasize or highlight one or more of the following:
• Analyze policies, programs and laws from a gender perspective
• Highlight influence of gender perceptions on the functioning of police, judiciary, administrators and other service providers in the implementation of laws and programs
• Challenge gender stereo-types by focusing on men and women who are redefining their gender equations e.g. changing work participation patterns of men and women, changing work distribution at home between men and women, etc.
• Analyze the social, religious and economic factors that promote gender inequality and gender violence
• Report on current events from a gender perspective e.g.: disasters, communal riots, elections, sports events, etc.
• Create awareness about pre-birth sex selection and other acts of gender discrimination and violence
• Interpret research and other reports/documents from a gender perspective e.g. census, economic survey, budgets etc.
• Voice the experiences of survivors of gender violence

Entry Requirements:
• All entries should have been published / displayed / broadcast or telecast between July 1, 2015 to June 30, 2016
• All entries (except from freelancers and from those applying under the web category) must include a declaration from the Editor / Direct Supervisor or commissioning organization
• Multiple entries in more than one category are allowed
• All entries to be sent on laadlimediaawards@gmail.com

The winners will be chosen by a jury comprising of eminent personalities both from the media and social sector. All the entries should be original and comply with copyright requirements and have been published / displayed / broadcast or telecast between July 1, 2015 to June 30, 2016. The last date for receipt of entries is 15th December 2016.

The Laadli Media Awards were instituted in March 2007 as a Mumbai centric event and were subsequently taken to the National level with the support of the UNFPA.

Laadli, a term of endearment meaning ‘cherished daughter’ in Hindi, is a campaign by Population First, a Mumbai-based NGO is a communications and advocacy initiative for a balanced, planned and stable population. Laadli is a comprehensive communication campaign aiming to promote a positive image of women and girls in society by changing the stereotypical mindsets that undervalue women. Laadli Campaign works with communities, colleges and media towards breaking gender barriers and bringing about gender equality in society. Laadli media advocacy includes a number of activities viz., Media fellowships, gender sensitization workshops for working and student journalists, interactive sessions with Creative Directors of TV Channels, Ad analysis with advertising professionals.

About Population First:
Population First (PF) is a communications and advocacy initiative for a balanced, planned and stable population. It was registered in March 2002 under the Bombay Public Trusts Act, 1950. Our key objectives are to help reduce gender imbalances in the population and work towards gender sensitive and social development oriented health and population programmes. We believe that the problem lies not in numbers but in the unequal social development and gender disparities that are prevalent in society. States with lowest gender and social development indices are the ones which have highest population growth rates indicating that women are not able to exercise their sexual and reproductive choices and are denied access to quality health and contraceptive services. (www.populationfirst.org)

About UNFPA:
The United Nations Population Fund (UNFPA), India works towards improving the health the well-being of the Indian population. It uses population data and research as the basis for its initiatives. The India programme is the UNFPA’s largest and works closely with policy makers, governmental institutions, NGOs and the community at large. UNFPA strives to empower citizens, particularly women to make informed choices on reproductive health, including maternal health. (www.unfpa.org)

For detailed Guidelines and Entry Form please log on to www.populationfirst.org