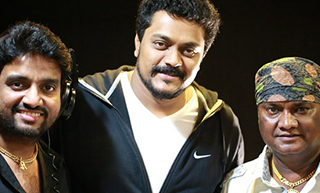 Viacom18 Motion Pictures’ comedy film Poshter Girl is ready for release on 12th February 2016. Dealing with a sensitive subject but in a fun filled satirical manner, the film promises to leave audiences in splits of laughter. The music of the film complements this spirit of the film and the first song that was launched is the funky DJ Song.

“Aawaz vadhav DJ tula Aai chi shappath hay” is definitely making everyone go crazy. Marathi father-son duo Anand and Adarsh Shinde have come together for the very first time to entertain Marathi music lovers. Anand Shinde has won many hearts over time but Adarsh has conquered the youth by getting them to groove to the tunes of the cool DJ Song.

Now-a-days parties are incomplete without inclusion of the DJ song of Poshter Girl film. The lyrics have been penned by Kshitij Patwardhan while the music has been composed by the talented Amitraj.

Viacom18 Motion Pictures is India’s finest fully integrated motion pictures studio that has emerged as a force to reckon with by delivering a stream of critically and commercially successful films. Offering differentiated and meaningful cinema, some of its iconic releases have been Mary Kom (2014), Queen (2014), Bhaag Milkha Bhaag (2013), Madras Café (2013), Special 26 (2013) and Kahaani (2012) to name a few. Viacom18 Motion Pictures is also one of the few studios to have successfully ventured into regional films across languages like Bengali, Marathi, Punjabi and from the South. The Studio has also backed path-breaking and much-appreciated creative work in the form of hits like Bombay Talkies, Gangs of Wasseypur I and II, OMG – Oh My God!, Manjunath, Shaitan, That Girl in Yellow Boots, Pyaar ka Punchnama, Inkaar, Saheb, Biwi Aur Gangster Returns and  Boss amongst others.