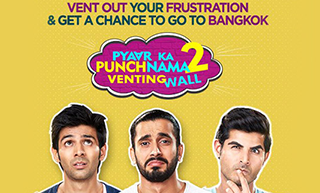 For all those who didn’t get it the last time round in Pyaar Ka Punchnama, love will be put to test again in Pyaar Ka Panchnama 2. The franchise will witness the return of the iconic monologue in an interesting 8 min chunk that will leave Kartik Aaryan breathless after his vent against love, women and relationships.

The previous monologue instantly became famous amongst the guys and the version in PKP2 promises to leave you in splits. Therefore, extending the idea of the monologue to the aam janta, the makers of the film have come up with the concept of ‘Pyaar mein Pareshaan’.  Targeting the boys, this is an on ground contest activation wherein the most ‘Pyaar mein Pareshaan boy’ gets a chance to win a trip all the way to Bangkok after a successful recitation of a heated monologue.

The Promotions of Pyaar Ka Punchnama-2 are on in full swing and in every city that the cast visit, they hear contestants rant about their grievances in love. They then decide who is the most ‘Pyaar mein Pareshaan’ and give him the exclusive prize. Spread across India, some of the cities that were and will be visited are Jaipur, Ahmedabad, Lucknow, Kanpur, Delhi and Chandigarh.

This was supported by a 360 degree marketing campaign and is being promoted heavily across malls, college visits, radio, digital and PR.

This particular contest will primarily be driven by the radio partner (Radio City) who have run this contest on air and identified several  ‘pyaar mein pareshaan’ Boys.

In Jaipur there was a young lad who rattled out the entire monologue and the team was so impressed by him that he won the contest and is set to fly to Bangkok very soon!

Well! this is surely going to be one interesting ‘pareshaan’ story to look out for!
VIACOM18 MOTION PICTURES Presents, A Panorama Studios Production “PyaarKa Punchnama 2”, Produced by Abhishek Pathak & Directed by Luv Ranjan – releasing on 16th Oct, 2015!!