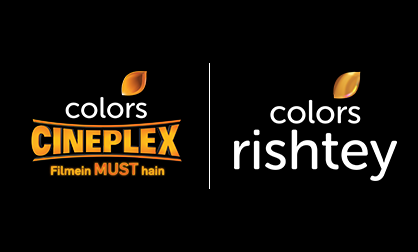 Monday, 25th Feb, Mumbai:  Harnessing the power of brand COLORS, Viacom18 has brought its 24-hour Hindi movie channel, Rishtey Cineplex and the Hindi general entertainment channel, Rishtey under the COLORS umbrella. Assuming their new identities March 1st onwards, the channels will be known as ‘COLORS CINEPLEX’ and ‘COLORS RISHTEY’ respectively. Amped up with new content, the channels will be establishing themselves as premium urban entertainment destinations available on a pay model.

After having positioned itself as the #1 mass Hindi movie channel, COLORS CINEPLEX in its reinvigorated avatar will woo the viewers with its powerful line-up of blockbuster films and content-around-content formats. COLORS RISHTEY on the other hand, will showcase recent and popular shows from COLORS’ vast content library, like Naagin Season3, Dance Deewane, Bigg Boss, Madhubala along with newly introduced original series like Navrangi Re! and Hum Saaf Saaf Hai.

Speaking about the new identity of the channels, said Nina Elavia Jaipuria, Head – Hindi Mass Entertainment & Kids TV Network, Viacom18, “The idea is to expand the aegis of brand COLORS and strengthen Viacom18’s Hindi Mass Entertainment portfolio drawing in more synergies. COLORS has established itself as a household brand in just a decade and it was a logical move to consolidate the mass entertainment channels under its iconic clout.”

“The new identity of the channels with golden hues and the archetype petal will convey the continuing evolution and growth of our business while also fortifying our bond with the viewers of the COLORS Family. So far, the trend and consumption on both the channels have been extremely encouraging and now with the scaled-up movie library along with its premium positioning, we are confident of breaking new ground,” she further added.

Apart from the morning, matinee, prime-time and weekend line-up of impressive Hindi films and hot-selling South Indian dubbed content, COLORS CINEPLEX will showcase byte-sized content  like, ‘Teetar mausi’ – a gossip section that will spill the beans on celebrities; ‘Dialoguebaazi’, where popular dialogues from various films will be mashed up using animated kinetic typography. In addition to this there will be vignettes of various film festivals, behind the scene trivia and coverage of exclusive RedCarpet extravaganzas amongst many other interesting concepts.