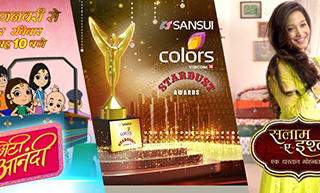 Mumbai, 5th January, 2016: As a New Year dawns, Rishtey, the free-to-air (FTA) channel from the stable 18 stable, will launch a volley of fiction offerings extending its early prime-time slot, along with the introduction of kids-friendly content on Sunday mornings and a gamut of blockbuster events and movies for an entertaining weekend. With refreshed packaging for not only the shows, but also the channel, Rishtey’s line-up of shows and offerings in 2016 will change the game in mass entertainment to make it one of the preferred choice for viewers across the country.

With festivities kicking off in style, Rishtey’s first major outing in 2016 will be the launch of a romantic drama Salaam-E-Ishq , a love-hate story of Zain and Aliya set against the Muslim milieu that will tug at the heartstrings of viewers unlike ever before. This endearing love story is set to go on-air starting 11th January, every Monday to Saturday at 9:00 PM.

The channel will also be extending its early prime-slots starting 5:00 PM with the introduction of shows like Pammi Pyarelal, Hamari Saas Leela, Yeh Pyaar Na Hoga Kam and Kitni Mohabbat Hai. With new and interesting content that will soon be showcased 7 days a week, Rishtey’s programming line-up will cater to audiences across age-groups and demographics.

In the coming year, Rishtey will also look at giving prominence to kids’ entertainment and focus on interesting content that will cater to the young audience as part of the Sunday morning programming. A first-of-its-kind, fun filled animated series Chhoti Anandi will capture adventures of a 8 year old brave, righteous kid Anandi as she explores innumerable escapades in the company of her friends. Additionally the enchanting tales of Vikram and Betal in Kahaani Vikram Betal Ki will further strengthen the entertainment quotient on Sunday’s. While Chhoti Anandi will air starting January 17th at 10:00 AM, Kahaani Vikram Betal Ki will air at 11:00 AM on Sunday’s.

The entertainment quotient will rise manifold with the Sansui COLORS Stardust Awards, to air on 10th January at 7:00 PM, which will celebrate 2015’s cinematic excellence and present top honours to the best of the best from the Indian film industry. And the celebrations will continue well into the New Year as Rishtey will telecast some of the biggest movies of 2015 like Manjhi and Pyaar Ka Punchnama 2 as part of the channel’s World Television Premiere line-up.

Along with the content line-up, Rishtey will further engage with its viewer’s with a series of marketing activities. This includes an interesting and engaging activities like Watch & Win contests giving them an opportunity to win prizes on a daily and weekly basis, with a bumper prize up for grabs.