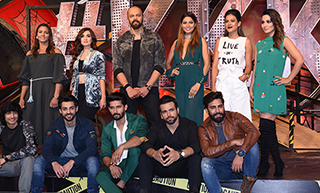 ~ 12 jaanbaaz Khiladis to test their fear quotient in Spain ~

Mumbai, 9th May 2017: Pain in Spain is the theme of the new season of the biggest action packed reality show on Indian television, Fear Factor: Khatron Ke Khiladi. The show will showcase action from the land of flamenco, fiesta and folklore – Spain, this year. Rohit Shetty makes a comeback after a year to host the upcoming season. Produced by Endemol Shine India, the beautiful terrains of Spain are all set to turn into a battleground with never-seen-before stunts as Khatron Ke Khiladi preps up to premiere this monsoon on COLORS.

Speaking about the newest edition of Khatron Ke Khiladi, Raj Nayak, COO, Viacom18 said, “We are happy to have Rohit Shetty back on the show. Both the seasons that he hosted earlier yielded rich dividends for the show. This time, with an exotic destination like Spain and carefully handpicked contestants, we are sure the show will become a blockbuster.”

Said Manisha Sharma, Programming Head – COLORS, “We have been taking the show to lots of exotic locations, Spain being the latest one. The line-up this year is very promising and the fact that we must take the show to its next level is very challenging. With Rohit Shetty back in the mix this year, we have tried to custom make stunts going by the playout of the previous seasons. Pain in Spain is going to be fun. Rohit too has his own ideas of frying this new bunch of contestants! The season is truly going to be Darr Ki Nayi Definition. The viewers will have a blast watching the Dangal girl- Geeta Phogat fight in a new battleground, daily soap bahu – Hina Khan test new waters out of her comfort zone, and have other television heartthrobs, Bigg Boss winners, singers and anchors prove their mettle against fear.”

Speaking about his return darr ka boss, Rohit Shetty, said, “Muchas gracias, COLORS for having me back on Khatron Ke Khiladi. Spain has some amazing locations that can truly test the daredevilry of the khiladis. With Colors and Endemol, together, I’m hoping we create another blockbuster experience for all. COLORS has picked up some excellent contestants this season and like the viewers, I’m looking forward to know them and test their fear quotient. I welcome aboard all the contestants and wish them luck for this experience of a lifetime.”

Commenting on the all-new season, Deepak Dhar, Managing Director & CEO – Endemol Shine India said, “With Khatron Ke Khiladi, Endemol Shine India continues to push the threshold of action, drama, and entertainment, on a grander scale with every passing year. Our constant endeavor is to redefine the notion of fear while creating a wholesome entertainment experience. This year, Spain will form the perfect setting for the stunts that we have planned. It’s going to be a fear-filled ride; Khatron Ke Khiladi will explore uncharted avenues of ‘Darr’ this season.”
As Khatron Ke Khiladi’s 12 unsuspecting khiladis depart for Spain with Rohit Shetty, they will be faced with a mix of stunts featuring not only heights, water, creepy crawlies and wilderness, but also some of the wildest experiences that will change their perspective of fear altogether!

About VIACOM18:
Viacom18 Media Pvt. Ltd. is one of India’s fastest growing entertainment networks and a house of iconic brands that offers multi-platform, multi-generational and multicultural brand experiences. A joint venture of Viacom Inc. and the Network18 Group, Viacom18 defines entertainment in India by touching people on-air, online, on ground, in shop and through its cinema.