Media
They Came, They Entertained and They Won Big at the Sansui COLORS Stardust Awards 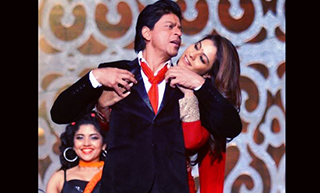 Mumbai, 21st December, 2015: More than 100 members of the Industry attended the Sansui COLORS Stardust Awards held at the Reliance Jio Gardens in Mumbai. Paying homage to the hard work put forth by the Indian Film Industry in 2015, the glitzy awards night witnessed a celebration of the commercially successful and critically acclaimed movies that have set incredibly high benchmarks in the year gone by. The splendid night brought together leading and prominent names from the silver screen, whose entertainment quotient reached unparalleled heights with some spectacular performances.

Increasing the viewer engagement quotient, for the first-time-ever a Facebook Live Room was created at the Red Carpet greeting celebrities with an arsenal of questions. This was streamed LIVE on COLORS’ Facebook page as the channel’s viewers and fans tuned in to watch the nervous celebrities face the brunt of some quirky and fun situations.

Tickling the funny bone of the audience was Riteish Deshmukh, who was joined by Bollywood’s sarcasm queen Farah Khan. Other hosts who kept the audiences in splits included Nimrat Kaur, Manish Paul and Krushna Abhishek. Further, the red carpet was hosted by Karan Wahi and Aishwarya Sakhuja. The grandeur of the evening was magnified by a volley of superstars who added to the spark of the evening through well-orchestrated performances. While the Badshah of Bollywood sizzled on stage with his Dilwale co-stars Kajol, Varun Dhawan and Kriti Sanon, Ranveer Singh performed to a royal Malhari act. Arjun Kapoor presented an adrenaline pumping stunts creating a roar of awestruck-ness among the audience. Other performances that dazzled viewers included those by actors Shahid Kapoor, Sonam Kapoor, Jaqueline Fernandez and Alia Bhatt. Versatile actor Varun Dhawan walked away with the Sansui Entertainer of the Year award owing to his outstanding performances in the year 2015.

Giving this year an entertaining end and a terrific kick-start to 2016, The Sansui COLORS Stardust Awards will be televised on 10th January, 2016 at 7pm on COLORS!

About Sansui
Sansui’s inception took place in 1947 in Tokyo, Japan. The company found faith at an enviable pace thus enjoying its presence in more than 100 countries. Sansui started its India operations in year 1997 and owing to its ground breaking technologies, today Sansui prides itself in being a house-hold consumer electronics brand in India. Sansui is one of the most loved brands in the country, with a reputation for new age technology and excellent after sales service. Sansui has marked its presence across all major towns and cities of India.
As the world moved from CTVs to LCDs to LEDs, Sansui has emerged with the latest technologies like Curved 4K Ultra HD, 4K Ultra HD, Smart, Connect, WHAM & SOEN Sound for its LED TVs range. With consistent dedication to quality, technology and unmatched customer satisfaction, Sansui ensures a life enriched with innovation