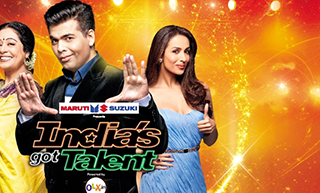 Mumbai, May 21, 2015: Over the Seasons India’s Got Talent on COLORS has become a mecca for those looking to showcase their extraordinary flair to the world. In a first-of-its-kind association, the show in its sixth season has joined hands with popular VoIP software, Skype, to get the viewers one step closer to their favorite show and its judges, hosts and contestants.

As a part of this association, a unique Skype ID namely ‘IGTonColors’ has been created exclusively for India’s Got Talent which facilitates interactions with the judges, hosts and this season’s enthralling talent. Through the Skype ID, users will be able to connect with like-minded fans of the show, gain access to exclusive India’s Got Talent content, and send any questions they may have to the judges and presenters. Focusing on bridging gaps and connecting people, the Skype integration will showcase the features of the internet-based calling service keeping encouragement and support for contestants, hosts and judges at the helm of its positioning.

Speaking about the partnership with Skype, Mr. Raj Nayak, CEO, COLORS said, “COLORS has always been at the forefront as far as optimum use of digital media is concerned and has a robust presence across all digital platforms. This first of its kind partnership between an Indian television show and an internationally acclaimed internet-calling service major is a move towards heightening engagement avenues and create direct connect with the viewers. Our integration with Skype is a step towards expanding the reach of social platform for India’s Got Talent across the world. By integrating Skype online as well as on-air, we aim to highlight that while this service brings you one step closer to your loved ones, India’s Got Talent strives to achieve the same by recognising outstanding Indian talent.”

Angie Hill, General Manager, Audience Marketing, Skype said: “We are excited to be working with this seasons India’s Got Talent on Colors.  The collaboration is the perfect example of ways in which our users can interact naturally with the things that matter to them.  Whether that be questions to the judges, hosts or even the talent, Skype users have the unique opportunity to engage with the show and get a lot more from their viewing experience, by simply using the Skype ID ‘IGTonColors’.”

This latest partnership is exactly the unique and fulfilling broadcast experience that Skype in Media aims to brings users all around the world – we’re looking forward to the rest of the India’s Got Talent season!

Using the Skype ID ‘IGTonColors’, viewers can now connect with their favourite show in a variety of ways:

In order to connect contributors from all over with India’s Got Talent, a Skype TX Studio has been installed on the sets of the show in Mumbai.  Whether they are desktop Skype client, or mobile device users, this unique technology will allow an up close interaction with the stars and contestants of the show in a way that has never been done before. Over the course of the series fans will be able to connect with the show through a range of Skype product features such as Skype to Skype calls, Group Video Calls and Video Instant Messages.

The sixth season of India’s Got Talent premiered on April 17th on Colors, with Karan Johar, Kirron Kher and Malaika Arora Khan taking their place at the judges’ desk while comedienne Bharti Singh and Nakuul Mehta donned the hats of the anchors.

The Guinness World Record-breaking franchise co-produced by Simon Cowell’s Syco Entertainment and FremantleMedia continues its reign as the Most Successful Reality Television Format in history: there are 67 local versions across Europe, Asia Pacific, the Middle-East, Africa and the Americas and 193 countries in the world have aired a version of the format.

Keep watching as Skype opens communication channels like never before bringing the world one step closer to talent that enthrals, on India’s Got Talent every weekend at 9:00 PM, only on COLORS