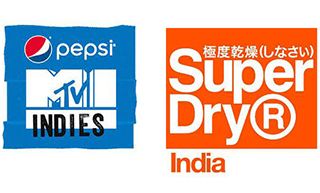 Mumbai, Oct 21st, 2015: Superdry, the Iconic British Brand known for its Japanese design influences in vintage Americana style, brings you a unique music property in collaboration with Pepsi MTV Indies, the world’s largest indie platform. ‘Superdry Krunk Live Sessions’ brings together some of the hottest young musicians in the country alongside some of India’s best visual artists. This first of its kind show aims to showcase how visuals, when combined with music, can accentuate the whole experience, making it truly unique. The show goes on air on Oct 29th, at 7PM, only on Pepsi MTV Indies.

The show is a 6 episode series and each episode of ‘Superdry Krunk Live Sessions’ will feature 3-4 absolutely original collaborations between musicians and visual artists. This will be followed by musicians and visual artists talking about their background, musical inspirations and their collaborations on the show. The show will also have an on-ground extension as every episode will also be followed up with a gig featuring the artists in the respective episode. These performances will be held across cities like – Mumbai, Pune, Delhi, Chandigarh, Hyderabad and Bangalore.

Speaking about the collaboration, Manu Sharma, Business Head Superdry (Reliance Brand Ltd), says, “Superdry globally, has a long standing association with music. We have always believed in curating the freshest sounds from across the planet and making them accessible to our customers through our in store and sound cloud playlists #SuperdrySounds. With Superdry Krunk Live Sessions’ we are extending our global philosophy to the Indian Independent music scene and are very excited to collaborate with MTV Indies on the property”.

Shedding light on the uniqueness of the show, Aditya Swamy, EVP and Business Head, Pepsi MTV Indies says, “We play in the world of subcultures and with his brand new production we are bringing together the world of electronic music beyond EDM and a form of art that’s beyond graffiti. Stylized and futuristic, this is brand new chapter in the space of collaborations, a space where sound and sight meet. It is hugely encouraging to have the support of a cult brand like Superdry in bring this cutting edge content to urban audiences across India. Step Up and Discover.”

Some of the well-known Indie music artists to be seen on the show will be – Kumail, Ox7gen, Nicholson, Donn Bhat, Madboy/Mink, Alowala, AquaDominatrix and Your Chin. The visual artists who will be collaborating with these musicians include – Moebius, Wolves, Transhuman Collective, Godgamut and Oblique.

The show will be hosted by DJ Mo City aka Mohammed Abood, a music entrepreneur and DJ with a passion for authentic music from all around the world. From being the founder of Reggae Rajahs (India’s first Reggae sound), to creating and running a series of successful club nights (Delitronica, The Future, Imported Goods) and programming stages at major festivals such as the NH7 Weekender & Sunburn Festival. ‘DJ Mo City’ will also interact with these artists while they create these amazing sounds and visuals, taking the audiences on a Visual Musical Extravaganza.

‘Superdry Live Krunk Sessions’ premiers on Oct 29th Thursday, between 7:00 to 7:30pm only on Pepsi MTV Indies, the always on platform for everything indie!

About Superdry
Superdry is an exciting contemporary brand which focuses on high-quality products that fuse vintage Americana and Japanese-inspired graphics with a British style. They are characterised by quality fabrics, authentic vintage washes, unique detailing, world leading hand-drawn graphics and tailored fits with diverse styling. Such distinctiveness has gained the brand exclusive appeal as well as an international celebrity following. Superdry has a significant and growing presence around the world, operating through 515 Superdry branded locations in 46 countries. There are 139 owned stores across the UK and mainland Europe, 208 franchised and licensed stores, all but one outside the UK, and 168 concessions.

About PEPSI MTV INDIES
Pepsi MTV Indies is the world’s largest platform for independent sub cultures and has been built in collaboration with a collective of artists and supporters of the independent scene. Led by Music, Pepsi MTV Indies also reflects other subcultures like independent Films, Art, Comedy and more, thereby taking these alternative art forms into the homes of millions. The channel was launched in February 2014 and is available across leading DTH and digital cable platforms.

Tapping into this pulsating, dynamic and fresh subculture, Pepsi MTV Indies is designed to bring together the vibrant potential of Indian youth. The channel’s programming includes mood based user generated playlists, artists busking on the streets of India, indie‘pedia’ to bring you up to speed on the happenings in the indie world, stories from amazing world that exists backstage, insights into iconic album art of our time, showcasing unusual suspects, graffiti art, bespoke automobile designing and avant garde fashion. Pepsi MTV Indies is an ‘always on’ platform available across TV, mobile, web and live events. The channel seamlessly integrates into the digital world with a unique mobile app called Pepsi MTV Indies and through an interactive website: www.pepsimtvindies.com