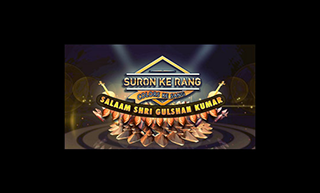 Commenting on partnership with T-Series, Raj Nayak, CEO – COLORS, said, “Over the years, we have strived to present Indian viewers with multiple entertainment avenues across genres and categories. SuronKe Rang is another step in this direction – curating content beyond the realm of films to celebrate the best of the music industry. Our first offering will be a tribute concert celebrating the illustrious life of Shri Gulshan Kumar and his contribution towards changing the face of the Indian music industry with songs that have touched the hearts of millions. We are happy to join hands with T-Series for this unique concert, a company which has changed the face of Indian music with a multitude of offerings in every genre catering to music-lovers with varied preferences.”

The first Concert, a tribute to Late Gulshan Kumar, will witness the participation of stalwarts from the world of Indian music as they come together to salute the magnificence that was Gulshan Kumar and recreate some of the best longstanding T-Series ballads which have marked the brand’s success over the past three decades. ‘SuronKe Rang – Salaam Shri Gulshan Kumar’ will showcase performances across genres showcasing the growth of Indian film music – from romantic films songs and spiritual bhajans, to foot tapping remixes, party hits, new-age Bollywood songs and unplugged EDM versions that have become a rage today, the concert will celebrate the coming to age of the Indian music industry.

Elaborating further, Bhushan Kumar, Chairman and Managing Director, T-Series said, “’SuronKe Rang – Salaam Shri GulshanKumar’is a celebration of T-Series and pays tribute to my father, Shri Gulshan Kumar, for his contribution towards making the Indian music industry a global phenomenon. It was his vision that has helped us to become the biggest music production company in India today and we could not think of a better way to thank him for his forward thinking. We are happy to join hands with COLORS, another visionary in the world of television, and are looking forward to collectively provide global viewers with the best in music and entertainment.”

COLORS’ bouquet of offerings has presented viewers with a stellar line-up of fiction dramas, non-fiction and reality shows, blockbuster movies and star-studded live events. Keeping in mind the rapidly developing Indian music industry, ‘SuronKe Rang – COLORS Ke Sang’ series will cater to the music-lovers. ‘SuronKe Rang’will celebrate the world of Indian music through multiple concerts and the first tribute concert will recognize the accomplishments of T-Series over the past three decades and celebrate the path breaking music created across genres which has entertained Indian music lovers globally. The concert will air on COLORS later this year.