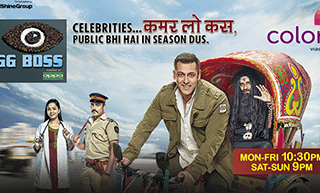 Mumbai, 12th October 2016: Bigg Boss – the original and unparalleled social experiment is ready again with yet another incredible edition armed with edgy entertainment. The all-seeing all-knowing authoritarian figure of Bigg Boss who monitors the Housemates’ every move, this time is all set to amuse and entertain people from two very different universes. On one hand you have the very unassuming ‘common man’, and on the other hand, the heady ‘celebrity’ brigade all set to experience 100 plus days under the same roof. COLORS’biggest reality show, Parle Appy Fizz presents Bigg Boss powered by Oppo Camera Phonesis all set to change the tide by giving the common man, handpicked after an extensive auditions process, an opportunity to live in the spotlight alongside celebrities. Superstar Salman Khan will return to manoeuvre this unpredictable and tumultuous journey. The Bigg Boss expedition begins on Sunday, 16th October 2016 at 9:00 PM, with subsequent episodes set to air every Monday to Friday at 10:30 PM and Saturday and Sunday at 9:00 PM on COLORS.

Speaking about the launch of the show, Raj Nayak, CEO – COLORS, said, “The common man rules the world. Their choices decide the fate of the Nations. Their decisions influence the fate of our shows. It’s time we welcomed them on their favourite show and gave them an experience of a lifetime. Bigg Boss this season will be a like a brand new game altogether. We will see two very strikingly contrasting worlds come side by side. While the celebrities will be image conscious, the common man contestants will be uninhibited in their approach. We are excited to tap these unharnessed energies to see what unearths. The meticulous auditions conducted threw up a gamut of people from different walks of life. From a World Bank Executive to a stand-up comedian who is also a LGBT activist, from a bus conductor to a security guard, from a self-made millionaire, to people from UK, US, Canada, UAE and the neighbouring countries. After multiple rounds of auditions, we have zeroed in on some unique common man contestants who, when locked away with the choicest celebrities, will raise the bar on entertainment under the watchful eye of our superstar host, Salman Khan.”

He further added, “Amongst the many firsts, this is also the first time when we have sold-out all our sponsorship slots well in advance. We are delighted to associate with Parle Agro’s Appy Fizz as Presenting Sponsors and welcome back Oppo Camera Phone as the Powered by sponsors. We also have UC Browser as the Trending partner and Maruti Suzuki Swift as the Driven by Partner. We look forward to creating mutually beneficial integration opportunities with our partners and building a long-lasting relationship.”

Talking about the association, Nadia Chauhan, Joint Managing Director and Chief Marketing Officer – Parle Agro said, “Appy Fizz is known for its bold, edgy and confident attitude. Bigg Boss as a property echoes this brand persona and its immense popularity amongst the youth coupled with its unique format allowing innovative integration, makes it a perfect platform for strengthening the connect between Appy Fizz and its target audience.”

Said Mr Will Yang, Brand Director, OPPO India, “Television is one of the most important platforms for OPPO in India to connect with the audiences as it has a wide reach amongst the Indian consumers, not just the metro but also expanding to tier 2 and tier 3 cities. This is our third consecutive year of being associated with Big Boss; OPPO being a brand associated with the youth of the country, compared to other mediums, the impact that television has is dual – audio and visual, helping us convey our messaging effectively. We believe this association will help us in creating awareness about the innovative technology that our camera phones incorporate.”

Revealing some intricate details about Bigg Boss, Manisha Sharma, Programming Head – COLORS said, “We have conducted auditions in every nook and cranny of the country for this edition of Bigg Boss. Be it entries online, in-person or through mail, we have given the common man every opportunity to make their mark on the show. And the response has been phenomenal! After months of deliberation, we have our final roster of contestants who will become the next entertainment sensations. With no preconceived notions and qualms, the common man contestants will remain uninhibited in their approach, thereby challenging the sensibilities of celebrity contestants whose conduct might be more controlled. So anticipate twists with every turn in this edition of Bigg Boss.”

As the chosen formidable common man contestants prepare to create history as they step foot inside the Bigg Boss house to nudge and coax the celebrities, the next 100+ days of their lives will be peppered with unadulterated and uninhibited entertainment.

Commenting on the format of the show, Deepak Dhar, Managing Director & CEO, Endemol Shine India said, “Bigg Boss this season is going to be explosive by all means! A set of common people who so far have just been viewers of the show are about to experience a life dictated by Bigg Boss for over three months and will emerge as stars by the end of it all. We have gone above and beyond everything that we have explored over the past seasons to make tweaks in the format such that both – the common man contestants and celebrities have a truly unpredictable journey. The varied contestant mix will add value to the franchise and amplify the entertainment avenues unlike ever before.”

COLORS has devised a 360-degree integrated marketing campaign to promote Bigg Boss across various platforms including OOH, radio integrations including a special tie-up with Radio Mirchi in Gujarat for Navratri, association with Durga Puja pandals, and vada pav and tea stalls in Mumbai, an initiative to revamp the Bigg Boss Whopper at Burger King outlets, and unique Bigg Boss branded cab roadshows in New Delhi and Mumbai. On the digital front, COLORS has collaborated with popular stand-up comedian and co-founder of SnG Comedy, Varun Thakur to create videos that build intrigue and drive conversations around Bigg Boss. Through his specially curated avatar ‘Vicky’, he will be seen giving tips to the general public on how to make it big inside the Bigg Boss house.

Along with Parle Appy Fizz as Presenting Sponsor and Oppo Camera Phone as Powered by Sponsor, for Bigg Boss, COLORS has roped in Maruti Suzuki Swift as Driven By Sponsor, UC Browser as Trending Partner, and Clean and Dry and Garnier Men Face Wash as Associate Sponsors. The channel has also roped in CP Plus and Ossum Perfumed Body Mist as Associate Sponsors for its HD Feed.

So get ready for two contrasting worlds to clash. Will they crash or will they unite?

About Endemol Shine India:
Endemol Shine India is one of the leading and most valuable content production companies in India across television, film and digital content. The company is a 51:49 strategic alliances between Endemol Shine Group – a joint venture between Endemol, Shine and CORE Media and CA Media – the Asian investment arm of The Chernin Group (TCG). Endemol Shine India is currently the premier content provider in the Sub- Continent, producing over 800 hours of programming annually for the biggest broadcasters; mainstream & regional. With a penchant for bringing in the Biggest Bollywood names on the small screen, Endemol India, ever since its conception in 2006 – has steadily emerged as a market leader with successful television shows like Bigg Boss (Hindi, Kannada, Bangla), Fear Factor, MasterChef India, So You Think You Can Dance, The Voice India, The Voice India Kids, The Great Indian Laughter Challenge, Love School, Life Mein Ek Baar, over 400 episodes of Deal or No Deal and The Money Drop for Sun Network amongst others. Endemol Shine India has also forayed into the movie making business with the remake of blockbuster Kahaani in Tamil & Telugu and Te3n, Traffic and Brothers in Hindi.

Internationally The Endemol Shine Group is a global content creator, producer and distributor with a portfolio of international hits with creative operations in over 30 markets and a diverse portfolio of over 600 revenue generating formats across scripted and non-scripted genres; coupled with digital, gaming, and distribution operations.

About Parle Agro:
Parle Agro Pvt. Ltd. is the largest Indian food and beverage company. Today, it is a ‘2,500 Cr organization’. It is known as much for its diversification into the Foods sector as much as it is for its leadership in the Beverages sector. It operates under four business verticals: Beverages (Fruit drinks, Nectars, Sparkling drinks and Carbonated soft drink), Packaged Drinking Water, Foods and PET Preforms. Each of these verticals operates as independent entities. As a part of their penetration strategy, they have also set-up an exclusive division for Beverages in the RGB format. Over the last few years, their infrastructure has grown to 76 manufacturing facilities both in India and overseas, and has developed a widespread network of 4,250 channel partners that cater to more than 10 lakh outlets in the country.
They cater to the mass market with brands like Frooti, Appy, Appy Fizz, Frio, Dishoom and Café Cuba. Frooti has been the pioneer in the fruit drinks segment and today enjoys market-share of 85% and 33% respectively in the Tetra Pak and PET categories. Appy is the undisputed market leader in the apple nectars category with a market share of close to 70%. Appy Fizz completely owns the category of sparkling fruit drinks.