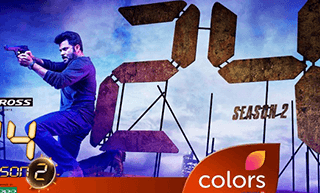 ~#24S2 amps up the thrill of the chase~
~In an all-new journey, Jai Singh Rathod races against the clock to conquer the chances of a bio-war~
~Premiering this July~

Mumbai, 8th June 2016: A doomsday conspiracy is brewing. A billion lives are at stake. And the only man who can save the country is nowhere to be found! Where is Jai Singh Rathod? The pieces of this puzzle will start to fall into place this July. As the nation teeters on a medical terrorism plot of mass proportions, a pulse-pounding tussle of power and respect will embroil an entire judicial and bureaucratic system. With Jai Singh Rathod at its helm, 24: Season 2 is the ultimate battle to save innocent civilians from becoming collateral damage. COLORS today unveiled the first look of its much-anticipated espionage thriller 24: Season 2. In the midst of the entire cast and the crew, the trailer was revealed in the presence of the show’s most vocal supporter, Aamir Khan at a suburban theatre in Mumbai.

Commenting on the trailer, Raj Nayak, CEO – COLORS said, “The first edition of 24 was an unprecedented game-changer; it conquered the Indian television industry with its freshness and gripping narrative. The show pushed traditional narrative boundaries with the device of presenting the plot within a real time format. We are in an environment where we cannot sit back and enjoy the customer’s loyalty. We need to take steps to differentiate ourselves from competition and ensure that our product has a high positioning in the viewers’ minds. The story bears terrific relevance because such situations might get real in today’s day and age. In times when terrorism is so pronounced, a bio-war is not a very far-fetched idea. As we return with the second season of the show, our challenge stands magnified. Anil Kapoor and the team have done an incredible job as the second season looks even more riveting in terms of storytelling and very international in terms of look and feel.”

Adding further, he said, “Our partners on the show, especially Maruti Suzuki S-Cross and Oppo Mobiles have been extremely supportive throughout this journey. The show has enabled us to create multiple integration opportunities for them, further strengthening their brand proposition and promise.”

Divulging details about Season 2 of the show, Actor and Producer Anil Kapoor aka Jai Singh Rathod said, “I have said from the beginning that the real star of 24 is the concept which will compel viewers to think about national sensibility and sentiment. We have devised a complex plot which when combined with Jai Singh Rathod’s volatile relationships, strong instincts and adrenalin-fueled action, will be the perfect setting to foil a devastating terrorist plot. We are exploring different plotlines to enhance content relatability, shooting at multiple real locations outside Mumbai, and amping up the production scale to enhance the overall television viewing experience. Like last year, we have got on-board a stellar line-up of cast whose dedication towards the show has made this my best creation. I also thank the entire team of COLORS for being with us in this journey and see our labor of love fructify.”

24: Season 2 picks up three years after the conclusion of Season 1. As the curtains rise, it’s evident that Jai Singh Rathod (Anil Kapoor) has isolated himself from the world to become a recluse on a self-imposed exile. His dark past has made him a fugitive from justice; and while his daughter Kiran (Sapna Pabbi) supports him, his son Veer (Akshay Ajit Singh), now a part of the Intelligence Bureau, does not. The iconic clock resets as druglord Haroon Sherchan (Sikander Kher) threatens to release a contagious airborne virus which will eradicate humanity, unless his brother Roshan (Ashish Vidyarthi) is released from prison. As radical groups and their potentially catastrophic plots unfold, the new ATU Chief – Shibani Mallick (Sakshi Tanwar) reaches out to Prime Minister Aditya Singhania (Neil Bhoopalam) to discuss preventive measures. Confident that only Jai Singh Rathod can prevent this brutality, Aditya Singhania calls upon him to ensure that reality is restored to its proper order. Setting in motion a series of events, the one-man-army Jai Singh Rathod returns to thwart every sabotage attempt in the face of political blackmail battling an unseen enemy with a personal vendetta.

Much like the first season, 24: Season 2 has also created much buzz in the entertainment industry. Every member and artiste is waiting to witness the blockbuster unfold before their eyes. One staunch supporter of Anil Kapoor and this season of 24: Season 2, is ‘perfectionist’ Aamir Khan who stands deeply impressed by the exclusive rushes of the show.

Speaking about 24: Season 2, Aamir Khan said, “What Anil has achieved with 24: Season 2 is absolutely phenomenal. He’s the first person in the industry to decode the fine balance between film and television audience, and their viewing needs. The second season of 24 highlights the hazards of biological warfare and medical terrorism, a concept that reminds me of my experience while shooting for Sarfarosh. Having played a cop and an outcast in my films, I know exactly how difficult it is to pull these roles off convincingly, and Anil has done a fabulous job. The rushes look really promising and I’m sure that the audience will support this new season of 24 too!”

Other than the entertainment industry, the show has also earned the support of the advertising community with Maruti Suzuki coming on-board as the Presenting Sponsor and Oppo Mobiles being the Powered by Sponsor.

Commenting on their association, Mr. RS Kalsi, Executive Director (Marketing and Sales) Maruti Suzuki India Ltd said, “24 is new form of international, premium entertainment, with an interesting amalgamation of fiction and reality for premium audience. S-Cross is a premium offering, which offers a unique combination of power and performance of a SUV and the comfort and refinement of a sedan. The target audience that 24 caters to and its genre allows us to draw synergies between the brands of S-Cross and 24. This association highlights the most significant virtues of S-Cross that make it an ideal crossover. S-Cross is perfectly designed to conquer the busy streets of the city as well as rough terrains which makes it the ideal crossover for the lead character Jai Singh Rathod.”

On bringing forth another high octane drama, said Manisha Sharma, Programming Head – COLORS, “What 24 can deliver in terms of thrill and excitement to the viewers is something that cannot be replicated by any other show on Indian television. Anil Kapoor and our creative team have created a mass-friendly product for the Indian audience. The plotline is spellbinding from the start. It questions the preparedness of our nation to fight issues like terrorism, bio-threat epidemics if it were to crop up; and the same is very interestingly intertwined with very close to life take on interpersonal relationships, personal equations and modern day demons like, stress, anxiety, depression and insecurity. We can’t wait for this new adventure to unfold!”

Said Mr. Sky Li – VP of OPPO, MD of International Mobile Business and President of OPPO India, “We are thrilled with this partnership with popular show 24 – the most awaited show this season on COLORS Channel. OPPO Mobiles has been a game-changer in the mobile devices industry through its innovation and leadership in Selfie Technology and Camera Performance and so is Show 24 with its action packed drama amid twists and turns. Our alliance with the show enables us to draw synergies with the show’s target audience and cater to their needs while increasing market penetration and brand recall.”

Said Director Abhinay Deo, “For all those who thought that 24, in its first season, was a bundle of excitement, they will not know what hit them when the second season hits screens. We have utilized the international series as a benchmark to create some visually stunning content that, when coupled with the right mix of Indian-ness, promises to be an entertainment extravaganza like none other. We have taken on the socio-economic scenario of the country to make for a compelling narrative. The anticipation and fear of a geo-political threat and viral outbreak has been brought alive vividly. The fragility of relationships and their ever changing dynamics will touch a chord with the viewers, thereby heightening relatability. The depth, intellectualism and unorthodox storytelling will heighten mainstream entertainment. It’s been a long journey, with some invigorating scenes involving top-notch actors like Anil Kapoor, Ashish Vidyarthi, Sikander Kher and Sakshi Tanwar, amongst many more. We are excited to share our hardwork with audiences and to see it bear fruition”

24: Season 2 brings together a superlative team that is supporting Jai Singh Rathod’s journey to protect the country and its citizens from destruction. Co-produced by Anil Kapoor Film Co and Ramesh Deo Productions, 24: Season 2 is being directed by Abhinay Deo and Rensil D’Silva and adapted for Indian audiences by writers Rensil D’Silva and Niranjan Iyengar. Some of the pivotal actors whose actions and decisions will impact Jai Singh Rathod and his mission include:

Providing action, thrill, suspense, drama and the exhilaration of solving complicated cases within a span of 24 hours, the show will feature a fast-paced storyline with never-seen-before stunts, slickly-edited sequences and high-definition recording.