Media
COLORS INFINITY Sets ‘The Stage’ For Newer Horizons With A First Of Its Kind English Music Reality Show In India! 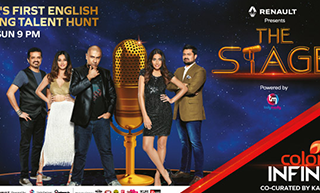 ~20 Talented Artists from across the nation vying for one title!~

~10 weeks to find the best amongst them!~

~A coveted Record Deal with Universal Music on the line!~

National, 8th October, 2015: Promises made are meant to be kept, that’s what we run with at COLORS INFINITY. This October, true to our word, COLORS INFINITY, takes your TV screen to an all new horizon with the first ever home grown English language singing show – The Stage, premiering on Saturday, October 10th, 9 PM. Hosted by the beautiful Shibani Dandekar, the groundbreaking new show has roped in four highly dynamic and eclectic music maestros as judges, who will thresh out the best from among 20 talented artists, and hand over the opportunity of a lifetime – a record deal with Universal Music, a 10 city tour along with a mentorship program to give the winner’s career that extra push. Our fantastic four, each brings a unique quality to the table.

A veteran in judging music reality shows, Singer and Music Director, Vishal Dadlani, is the seasoned and experienced mentor and judge.

Judging a reality show for the first time on television, Singer and Actress, Monica Dogra, symbolizes the heart and soul of music and its ethos.

Ace Music Director, Ehsaan Noorani, is known for his technical expertise and will bring that very prowess to the show.

The Suit of the show, MD and CEO, Universal Music Group South Asia and EMI Music South Asia, Mr. Devraj Sanyal, has the know-how and command of the business.

Produced by SOL, the show aims to choose the best of the participants who will only be judged by the jury members with no voting from viewers. One artist will emerge victorious from amongst twenty young hopefuls through weekly performances, scrutiny by the judges and heart-breaking eliminations. The pot of gold on the other side, is the launch of the winner’s career with a record deal with Universal Music, a 10 city tour, a mentorship program, the full muscle of Viacom18 backing the winner’s music career across all its platforms and a brand new Renault Duster to ride in to their new life.

Speaking about the breakthrough concept, Ferzad Palia, EVP Viacom18 and Head of English Entertainment, says “The Stage is a platform that will showcase the best English language music talent in this country. Not only will the immense talent finally get a place to showcase themselves, but the doors to their future will be thrown open with the record deal at the end of the journey and us backing them for their career ahead”

Renault, our title partners of the show, are equally excited about the new venture, Virat Khullar, Marketing Head Renault India, said, “The Stage is a fresh new concept in Indian Television which is bound to change the scope of entertainment in this country, and this belief in the show is the foundation of our partnership with COLORS INFINITY. We are glad that we can be a part of this huge transformation of English entertainment in India”.

The channel has rolled out a 360 degrees marketing plan with extensive campaign on its digital and on-ground platforms. The show is being promoted on other network channels and brands of Viacom18 including MTV, Vh1, INS and Live properties.

After its launch a mere 2 months ago, COLORS INFINITY has consistently surprised its viewers with back-to-back shows, Instant Premieres and a refreshing line-up. Now, with The Stage, the channel has taken a huge leap forward by providing a platform to nurture and hone English singing talent in India.
It’s time to experience a whole new horizon on Indian Television, with The Stage on 10th October, only on COLORS INFINITY.

About SOL
Sol has carved a niche for itself in the area of unscripted content by producing some of the biggest hit shows; hit shows that attained a cult status, on Indian television. Their clientele includes broadcasters, media houses, advertising agencies, international production houses Not-for-Profit enterprises, publications and corporate houses. At Sol, they believe in inclusive growth and providing value to the partners by producing superior and value-for -money content. They believe in the content they produce, understand and value the sensibilities of viewers.