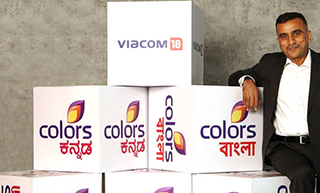 Subject to receipt of mandatory regulatory approvals, Viacom Inc. thru its subsidiary Nick Asia will acquire a 50% interest in the five regional general entertainment channels, while TV18 will continue to own the remaining 50%.

COLORS has established itself as a mass brand, synonymous with unparalleled entertainment. The ETV general entertainment channels that will undergo the brand transition, have been pioneers in regional entertainment, mirroring the rich heritage and culture of each region, with differentiated and innovative programming. The rebranding of the regional GECs will augment the COLORS franchise while facilitating higher resonance for the regional channels vis-a-vis competition.

On making the regional foray, Sudhanshu Vats, Group CEO Viacom18 Media Pvt. Ltd. said, “59% of the country converses in regional languages as their primary language of choice. Today regional TV channels command the second largest viewership in India. The expansion fuels our growth strategy in building the COLORS franchise, a brand that has become the cultural touchstone for millions of Indians across the world. The move will help us foray into key regional markets as we nurture and monetise the bouquet across platforms.”

On the COLORS franchise expansion, he said, “Through its unique shows and voice, COLORS has become the preferred destination for differentiated storytelling in the Hindi mass entertainment channel space. In consonance with this approach to content, the new regional programming lineups have been evolved to suit the socio-cultural ethos of the respective regional markets. We will bring alive the rebranding of the regional general entertainment channel cluster through enhanced packaging and an integrated marketing approach.”

On the communication approach to socialise the rebranding, he indicated that the “revelation of the new brand identity of each of the five regional channels has been staggered across a period of 2 Months starting March 1st 2015. It is scheduled to coincide with regional festivals that mark new beginnings. 360° marketing and communication campaigns encompassing TV, cinema, cable, on-ground, radio, outdoor as well as digital platforms, customised to individual regional markets, will amplify the change.”

Campaigns for each regional brand will leverage the distinct fervour of the corresponding state or region through region specific events and / or on-ground activations involving popular local influencers. Each high-decibel campaign will run for approximately 4 – 5 weeks, beginning with COLORS Marathi on 22nd March 2015. Coinciding with the Maharashtrian New Year – Gudi Padva, a high decibel event will unveil the new face of COLORS Marathi. Similar extravaganzas will also celebrate the unveiling of the new brand identities of COLORS Oriya coinciding with Utkala Dibasa – Orissa’s foundation day on 1st April, COLORS Bangla coinciding with Poila Baisakh – The Bengali New Year on 12th April, and COLORS Gujarati on 19th April. The unveiling will culminate with the rebranding of COLORS Kannada on 19th April.