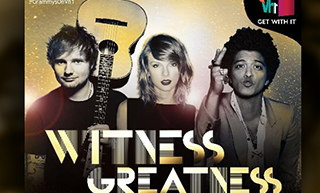 ~Catch all the action straight from Los Angeles on Tuesday, 16th Feb at 7.30am with a primetime repeat at 9pm~

National, February 10th: Continuing with the international-awards fever of 2016, Vh1 is all set to air the biggest night for international music in India. The glamorous 58th Annual Grammy Awards will simulcast from STAPLES Centre in Los Angeles, California on 16th February, 2016 at 7.30am, with a Prime Time repeat at 9PM on the same evening.

The 58th edition of the GRAMMYs will witness rapper LL Cool J host the evening for the fifth time consecutively. This year’s awards night will be graced with performances by a league of renowned legends.  The eclectic line-up comprises of superlative artistes such as 11-time Grammy Nominee Kendrick Lamar, 7-time nominee The Weeknd along with 10-time Grammy Award winner Adele, to name a few.

“After an overwhelming response to the airing of Golden Globe Awards, we take pride in carrying forward the awards fever ever further with simulcast of the GRAMMYS on Vh1. Keeping the promise of showcasing only the best of English Entertainment, we are excited to showcase the grand edition of the biggest music night in the world for our viewers once again.” – Ferzad Palia, EVP, Viacom18 & Head – English and Youth Entertainment.

This year, Lifetime Achievement Award recipient David Bowie will be honoured with an experiential tribute performed by one of his biggest fans, six-time GRAMMY winner and current nominee Lady Gaga. Affording audiences a chance to experience Bowie’s music once again, the tribute will be a multisensory testament to the icon’s incredible artistry and a reflection of his limitless creativity. The tribute will mark Lady Gaga’s fourth appearance on the GRAMMY Awards telecast. She has been nominated for the category ‘Best Song Written For Visual Media’ for “Til It Happens To You” with Diane Warren.

The channel has leveraged the GRAMMYs through various innovative associations and tie-ups. Vh1 has associated with 15 of the best hangouts across 10 cities in India, Including Hard Rock Café to screen the 58th Annual Grammy Awards in 15 outlets across 8 cities. Jean Claude Biguine has also been roped in to create exclusive GRAMMY red carpet looks across all their outlets.Vh1 will also be conducting a unique college activation where they shall be sending a Grammy branded car to 3 of the most popular college campuses across Mumbai, Delhi and Pune in order to galvanize the students, Over and above that, they will also be reaching out to over a 100 colleges across India through their extensive college network. Leading up to the awards, Vh1 has also organized an extremely special Ticket To Ride, giving one lucky winner to attend and witness the biggest and most prestigious music awards in existence.

Note: For the list of nominees, please check the link https://www.grammy.com/nominees