Media
Vh1 beats the heat with its refreshing summer line-up 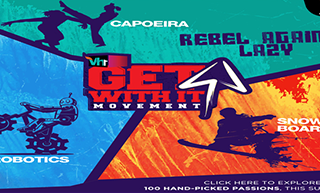 This summer Vh1 brings to you the best of awards, shows, campaigns and promises to be the hub of everything cool!

National: Vh1, the pioneer of international music and entertainment, brings to its viewers a power-packed line up of exciting programming to enthrall viewers throughout the next few months of blazing summer heat.

Come Saturday, Vh1 commences its non-stop summer entertainment with Asia’s Got Talent. The talent hunt will be followed by the launch of Vh1’s Get with It movement, new seasons of Catfish: The TV Show, 2015 Billboard Music Awards, Hollywood Film Awards and the new season of Britain’s Got Talent.
Announcing the channel’s summer line up, Ferzad Palia, Executive Vice President and Business Head, English Entertainment, Viacom18, said, “Our previous showcase of international reality shows and LIVE international awards on Vh1 have received overwhelming response. We take the mandate of entertaining our viewers forward with fresher and more eclectic offerings. New seasons of the immensely popular Catfish and Britain’s Got Talent, a simulcast broadcast of Asia’s Got Talent and the 2015 Billboard Music Awards airing live – we are excited to present our new summer line-up to our audiences.”

The first-ever season of Asia’s Got Talent is set to premiere in India on 18th April, with Grammy-winning musician David Foster and UK pop sensation & former Spice Girl, Melanie C seated on the judges’ thrones. The new season will see hopefuls from across Asia showcasing their talent to the world – celebrities in their own right, Indian sand-artist Nitesh Bharati, martial-arts experts Bir Khalsa, Opera singer Toshanbor, popular child artiste Akshat Singh, will be among contenders for the Asia top title.
Vh1’s Get with It movement brings to its followers a plethora of new activities with a resounding message to rebel against the lazy. With this movement Vh1 will guide people through the various activities, programs and events out there associated with being “cool”. From skydiving to mixed martial arts, this movement is all about getting people out of their comfort zones and discovering and participating in activities which they would have never otherwise imagined or considered.

The reality fever on Vh1 will continue with latest season premieres of Catfish: The TV Show Season4 on 4th May and Britain’s Got Talent Season 9 on 1st June. While Catfish returns with its fourth season with more peculiar characters and fresher stories, Britain’s Got Talent gears up for its ninth season with its popular judging panel comprising Simon Cowell, David Williams, Amanda Holden and Alesha Dixon. The peppy pack will be joined once again by the famous duo Ant and Dec.
Vh1 keeps the buzz of international awards alive with the broadcast of the Hollywood Film Awards on 27th April and the much-awaited 2015 Billboard Music Awards LIVE from MGM Grand Garden Arena in Las Vegas on 18th May. The evening, hosted by Hip Hop artist and actor ‘Ludacris’ along with TV host and supermodel ‘Chrissy Teigen’, will showcase this year’s favourite musical acts and biggest music stars. The 2015 Billboard Music Awards forms part of the illustrious award show line-up aired live on Vh1 which includes the Golden Globe Awards, The American Music Awards, Annual Grammy Awards, Video Music Awards and Europe Music Awards to name a few.
~Stay tuned to Vh1 throughout this summer to get the best of entertainment~

About Vh1 India
Vh1 is India’s only 24-hour International entertainment channel that provides viewers with their daily dose of International music, Hollywood, Pop culture and Lifestyle. Vh1 is a part of Viacom 18, a 50 – 50 joint venture between Viacom & TV 18. Since its inception in January 2005, Vh1 has grown tremendously reaching over 75 million people in India. Vh1 India has grown the English music audience by 180% in the last 5 years alone. The channel has pioneered the heady combination of programming content and live on ground activities. Vh1 has been committed to bringing to Indian audiences the best of international music genres like EDM, punk, rock, reggae, hip hop, pop, jazz etc. Through their international properties like ‘Rock Rules’, ‘Jazz Masters’, ‘Hip-Hop Hustle’ & ‘Handpicked’ Vh1 has successfully brought down, artists such as  Anoushka Shankar, Wyclef Jean, KardinalOffishall, Mobb Deep, Flipsyde, Jazz legend Herbie Hancock & chart topper Simon Webbe. From 2011, Vh1 India also secured a multi-year deal for Music’s Biggest Event – The Grammys. This deal has spearheaded Vh1 as the No.1 viewing destination for the youth in the English entertainment and lifestyle space. Globally, Vh1 is available across 148 million households in over 124 countries/territories.