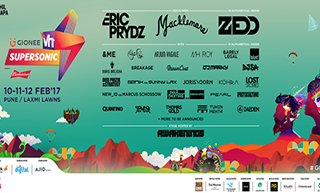 ~ Joins hands with brands across various sectors such as Ecommerce, Lifestyle, and FMCG for sponsorship~

~To reach out to 90 million consumers through customized brand solutions~

National, January 30th, 2017: Uniting all music lovers in Pune, Gionee Vh1 Supersonic powered by Budweiser is all set to transform into a multi-genre international destination from 10th – 12th February. After three successful editions of creating the best of live dance music experience for its audience, LIVE Viacom18’s marquee property, Vh1 Supersonic 2017 has nearly doubled its sponsorship value since the previous edition by partnering with brands from diverse sectors on the back of tremendous success in the past editions and a transformed genre line-up. These brands associated with the music festival would be able to successfully reach out to 90 million consumers, given the strength of Viacom18 network channels and OTT platform VOOT.

Owing to the success in the last three years, the all-new edition of Vh1 Supersonic has received tremendous support by its sponsors. While Gionee has come on board as a Title sponsor and the festival is powered by Budweiser, the total sponsorship value this year has grown nearly two-fold since the previous edition, comprising names such as Fastrack, Mexitos, Ajio.com, Reliance Digital, Bisleri, Spraymint and Dot Shot. The festival now has sponsors across various sectors such as Ecommerce, Lifestyle Consumer, Electronic Retailer and FMCG, to name a few.

Commenting on the transformation of Vh1 Supersonic 2017, Saugato Bhowmik, Business Head, Integrated Network Solution & Consumer Products, said, “In the last four years, we realized that our young audience was inclined towards wanting newer experiences and diverse musical genres. Hence, we took a conscious decision to transform this edition into a multi-genre international music festival. This transformation, supported by the success of our previous editions, has led us to a near doubling of our sponsorship value this year.”

This year, the music festival has adopted a unique approach to promote sponsoring brands across platforms. Going beyond conventional route of sponsorship, Vh1 Supersonic 2017 has strengthened the level of partnership with sponsoring brands by ensuring seamless, symbiotic integration. Strengthened by the Viacom18 network, Vh1 Supersonic is in the process of creating customized branded content for its sponsors such as after-movies for Gionee and Budweiser, webcasts as well as web-series that would be aired across all channels of Viacom18 as well as OTT platform, VOOT, thereby reaching out to 90 million consumers.

The promising artist lineup for this year comprises over 50 artists with three headlining acts. After sending fans into a frenzy with Eric Prydz and going in for an encore with Macklemore, Vh1 Supersonic recently unveiled Zedd as its third headliner. In addition to the immaculate lineup, the music festival has unique on ground experiences awaiting the audience in Pune. Audience can also enjoy a gamut of experiential activities beyond the mammoth artist line-up across the three days of Vh1 Supersonic. They can lose themselves in numerous hangout zones, filled with fun and adventurous activities, enjoy in a curated beer garden, weave through engaging art installations, shop till they drop at flea markets, and a lot more!

Gear up to transform yourself with the 4th edition of Vh1 Supersonic 2017 on 10th – 12thFebruary in Pune!

About LIVE Viacom18
Live Viacom18 is a is a wholly owned subsidiary of Viacom18 Media Pvt. Ltd. Live Viacom18  was  set  up  with  a  strategic  objective  of  growing  International  entertainment  and  its  consumption on all platforms : Live, Television, Mobile and Online. Live Viacom18 focuses on building IP’s in all genres of Music (EDM, Rock, Pop and Jazz) and Entertainment (Comedy and theatre shows). LIVE Viacom18 has built more than 12 large format IPs across categories over the last few years and is uniquely positioned to build a 360 degree promotional and fan base built   up ecosystem.  Live  Viacom18  has  a  strong  technology business called Spotlight which has  direct  partnerships  with  all  leading  telecom  and handset operators in India which give its  access to 900 million touch points for pushing  consumption of music, varied form of content  and  music  from  the  live  events  and  Artists  bytes and trivia. LIVE Viacom18 engages with millions of consumers through impactful large format live properties such as Vh1 SUPERSONIC MTV VMAI, Nickelodeon KCA, Emerge, MTV Xtreme, and Comedy Central Chuckle Festival amongst others.

About Viacom18
Viacom18 Media Pvt. Ltd. is one of India’s fastest growing entertainment networks and a house of iconic brands that offers multi-platform, multi-generational and multicultural brand experiences. A joint venture of Viacom Inc. and the Network18 Group, Viacom18 defines entertainment in India by touching the lives of people through its properties on air, online, on ground, in shop and through cinema.