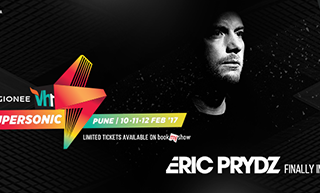 ~ Legendary Swedish DJ, Eric Prydz – with a known aversion to flying –  will make his first appearance in India with Vh1 Supersonic 2017 ~

~ As Vh1 Supersonic moves closer to its audience in its 4th edition by relocating to Pune; it will undergo a transformative process

~Vh1 Supersonic 2017 tickets available at www.bookmyshow.com. Tickets for the fourth edition of the festival have already seen a huge spurt in numbers with early Bird tickets selling out in record time ~

National, December 22, 2016: This February, LIVE Viacom18’s marquee property Gionee Vh1 Supersonic, is back with a powerful experience. The festival that’s been responsible for bringing landmark artists and events to India including Skrillex, Major Lazer, and Chainsmokers is set to announce an artist widely recognized as a game-changer in the electronic music industry, as it’s first headline act of the 2017 edition of Vh1 Supersonic – Eric Prydz.

Fans in India have been clamouring for years for Eric Prydz, with many having given up hope that the artist would ever come to our country on account of his well-documented aversion to flying. In the past, Eric’s preferred mode of transport across cities, countries and even continents, has been buses, trains and on occasion, the odd cruise ship too. Convincing Prydz to come to India for his first ever performance has been nothing less than a coup for the team at Vh1 Supersonic.

Vh1 Supersonic’s announcement of Eric Prydz as one of the festival headliners will send a ripple of excitement through fan communities in India and across the Asian region as well. This is not only his India debut but also his first ever performance in any Asian country. Fans are expected to flock to Pune from all across India, with a considerable number also expected from Dubai, Abu Dhabi, Bahrain, Sri Lanka, Malaysia, Muscat, Singapore and the Maldives as well.

Prydz is a household name, respected by fans of all electronic sub-genres – something few artists can lay claim to, in this day and age. He is also deeply revered by his peers and credited with the creation of the “Pryda Snare” – a production technique that has been widely used by the biggest names in the dance music industry including Martin Garrix, Dimitri Vegas & Like Mike, W&W and several others.

A legendary Swedish DJ and producer, Eric Prydz is synonymous with immaculately produced and unique sounding electronic music. Some would even call his sound a separate and self-sustaining sub-genre in electronic dance music. The Platinum-selling producer has been responsible for some of the biggest progressive house tracks of the last decade. His live shows are arguably the most technically impressive, of any touring artist.

As a solo artist Prydz has headlined, and sold out some of the world’s most renowned venues, including Madison Square Garden, Brixton Academy and Alexandra Palace. He’s earned multiple Grammy nominations and topped charts with his alter-ego monikers Pryda and Cirez D. His dedication to his craft is unparalleled and has earned him accolades and appreciation from a diverse community of fans globally. The quality of his music and live sets has ensured that he stays in the highly enviable and unique position of being able to appeal to dance music’s underground hipsters as well as masses of fans that lean towards a more mainstream sound.

Quite simply put Eric Prydz is the unparalleled best of both worlds – the Mainstream and the Underground. There is just no one else like him, in the entire electronic music industry.

Excited about the announcement, Saugato Bhowmik, Head, LIVE Viacom18 and Consumer Products, Viacom18 shares, “We at vh1 Supersonic have always been passionate about bringing the most transformative, never before experiences for our fans in India and beyond. And our Superfans have in turn always rewarded us with their unqualified love and support. As we move into our fourth edition at Pune, we couldn’t think of a more legendary and revered artist from the EDM sub-genre than Eric Prydz to carry forward this tradition. It has been a virtual coup for us at Vh1 Supersonic to bring Eric to India and I can assure our Superfans that it does not get any bigger than this in the international dance music scene. We have more exciting news coming up soon for our superfamily about the rest of the line-up and I am certain they will be thrilled with what we have planned for them”

Delighted about the announcement Festival Curator Nikhil Chinapa says: “Eric’s been an artist we’ve been trying to bring to India forever. I’ve heard him several times in different continents and I can truly say, there is nobody like him in all of electronic music’s landscape. Bringing him to India for Vh1 Supersonic is a dream come true – a dream to share his incredible music with my closest friends, who’ve never heard him live before. With this booking and after all these years, it feels like my work in electronic music is complete.”

Tickets for Vh1 Supersonic 2017 will be available at www.bookmyshow.comThursday from 22nd December. Introducing an generous discount in ticket prices, the fourth edition of Vh1 Supersonic would start its General category tickets INR 2,250 onwards, and VIP category INR 3999 onwards.

Gear up to transform yourself with the 4th edition of Vh1 Supersonic 2017 this February in Pune!
About LIVE Viacom18

Live Viacom18 is a is a wholly owned subsidiary of Viacom18 Media Pvt. Ltd. Live Viacom18 was set up with a strategic objective of growing International entertainment and its consumption on all platforms: Live, Television, Mobile and Online. Live Viacom18 focuses on building IP’s in all genres of Music (EDM, Rock, Pop and Jazz) and Entertainment (Comedy and theatre shows). LIVE Viacom18 has built more than 12 large format IPs across categories over the last few years and is uniquely positioned to build a 360 degree promotional and fan base built   up ecosystem.  Live Viacom18 has a strong technology business called Spotlight which has direct partnerships with all leading telecom and handset operators in India which give its access to 900 million touch points for pushing consumption of music, varied form of content and music from the live events and Artists bytes and trivia. LIVE Viacom18 engages with millions of consumers through impactful large format live properties such as Vh1 SUPERSONIC MTV VMAI, Nickelodeon KCA, Emerge, MTV Xtreme, and Comedy Central Chuckle Festival amongst others.